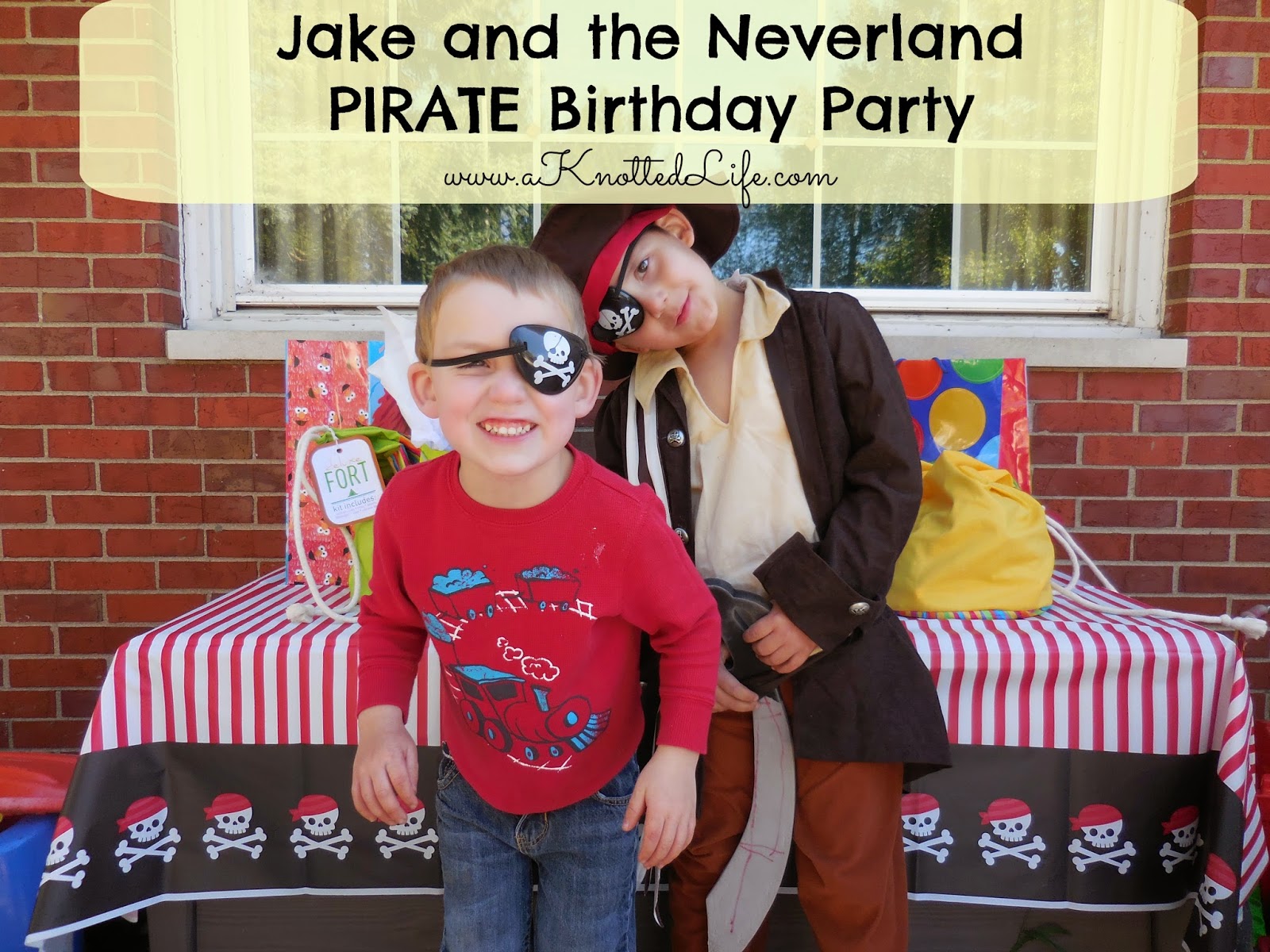 My boys wanted a pirate birthday party. JF wanted it to be a Jake and the Neverland Pirates party and Ben wanted it to be just pirates. I blended the two and everyone was happy.


The Invites
The first thing we did was make some pirate-y invitations.

I always like to include pictures of my kids on their birthday party invitations, that allows grandparents, great grandparents, godparents, and other loved ones to always have a current picture of my children. 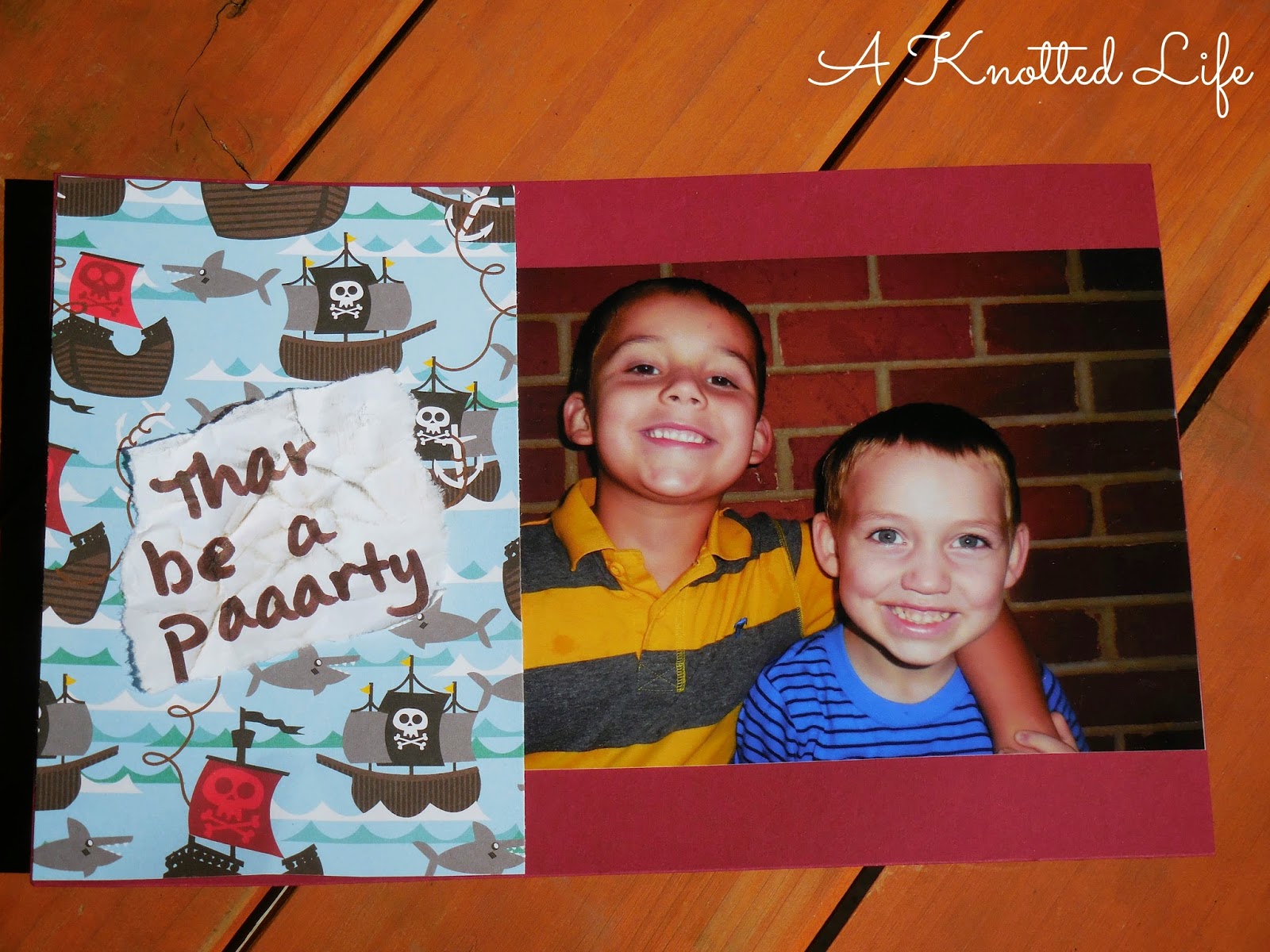 Red cardstock + scrapbook paper. Then we had the kids crumple sheets of white paper and I wrote in my best Pirate. I also "dirtied" the paper up a bit with some brown and black ink.

The back of the card had a treasure map, which we folded into thirds and taped on the back. 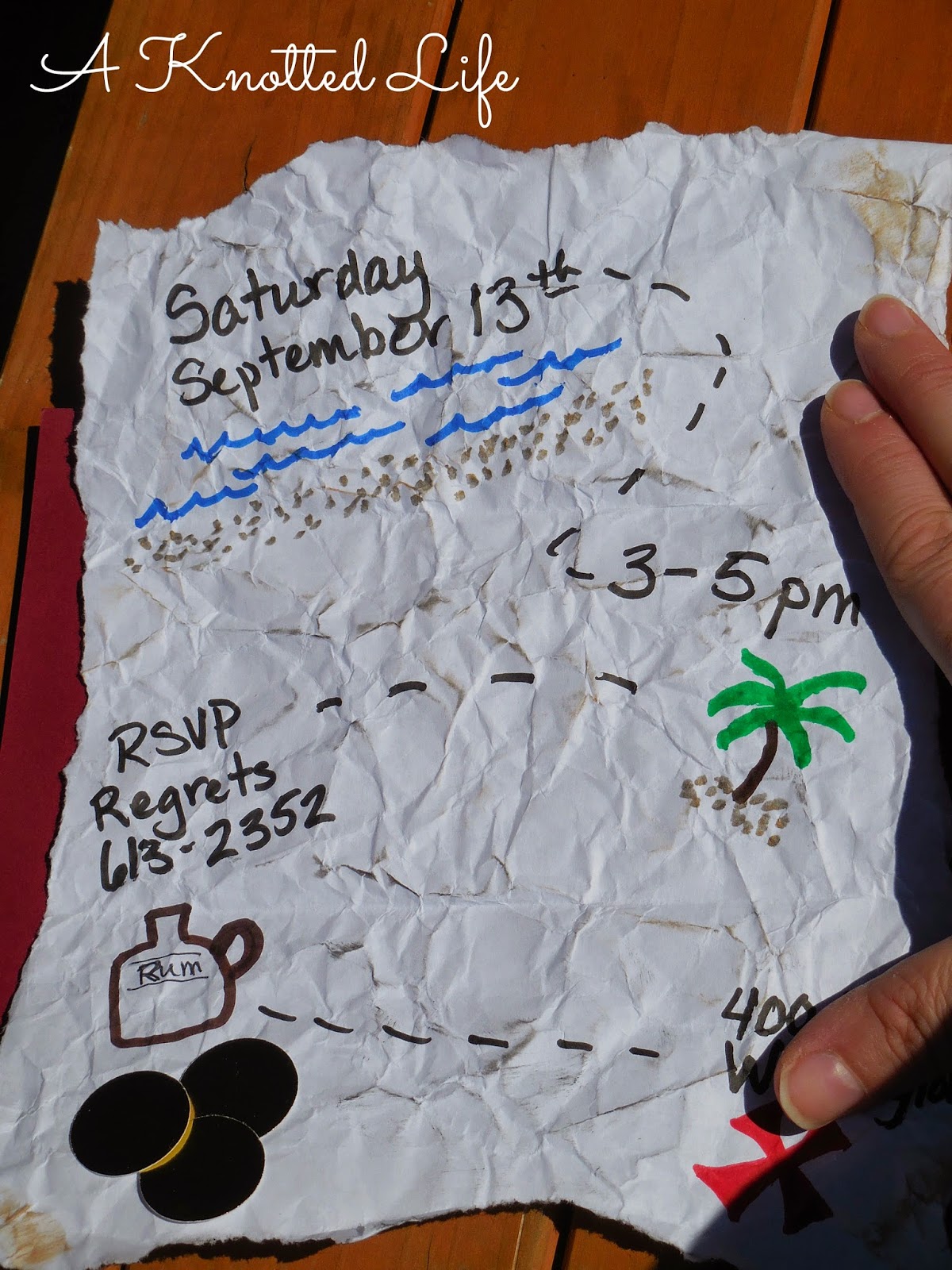 Again, the kids crumpled the paper. I drew the map with markers and used ink to age it. We also punched out "gold doubloons" using a handy circle punch and some shiny, golden paper.

I laid the food out on our two-tiered kitchen peninsula. I covered the counter with a cheap, plastic tablecloth and a belly dancing wrap with fake gold coins that we got at a Lebanese wedding reception.  I used a skull from our Halloween decoration bin and my childhood Peter Pan snow globe that now sits on L's dresser. 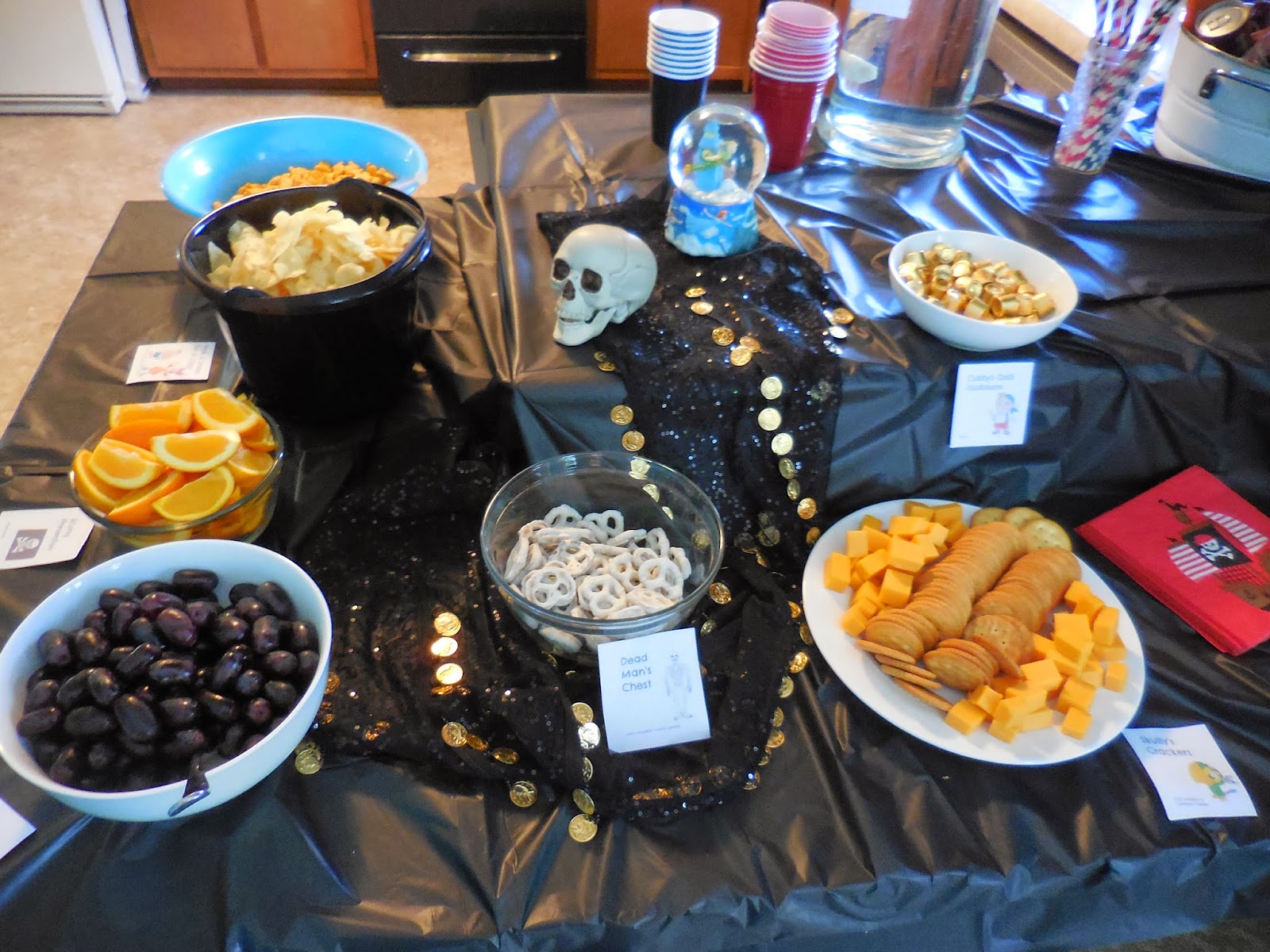 Golden plates, one package of special pirate napkins from Target, and then some red and white striped napkins from Wal Mart's party section and we were set.
One thing I loved about the red and white napkins is that I can use the leftovers for Christmas (candy canes!) or even next 4th of July (add some blue plates and we're set!) 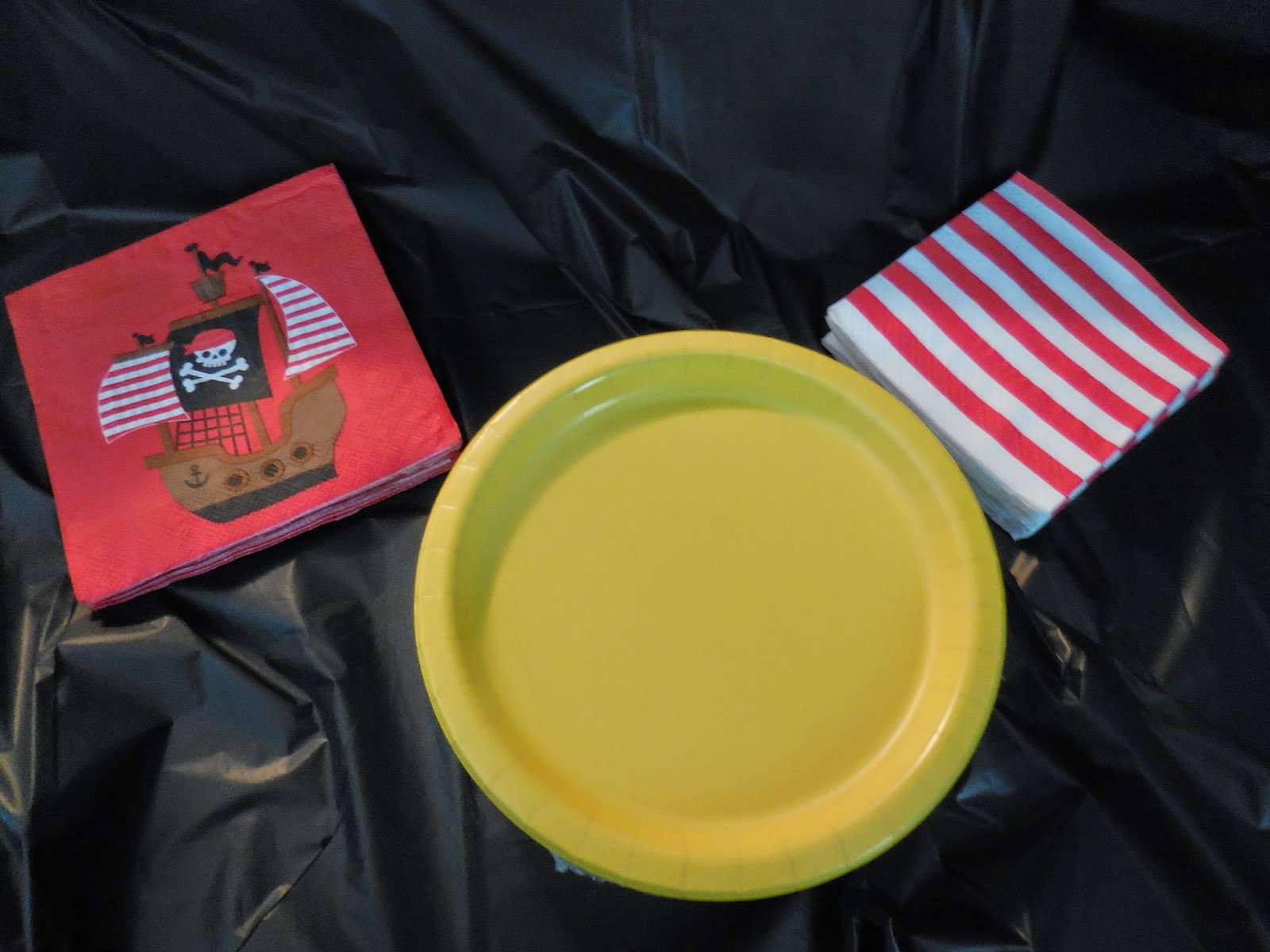 My mother- and sister-in-law made this amazing pirate ship: 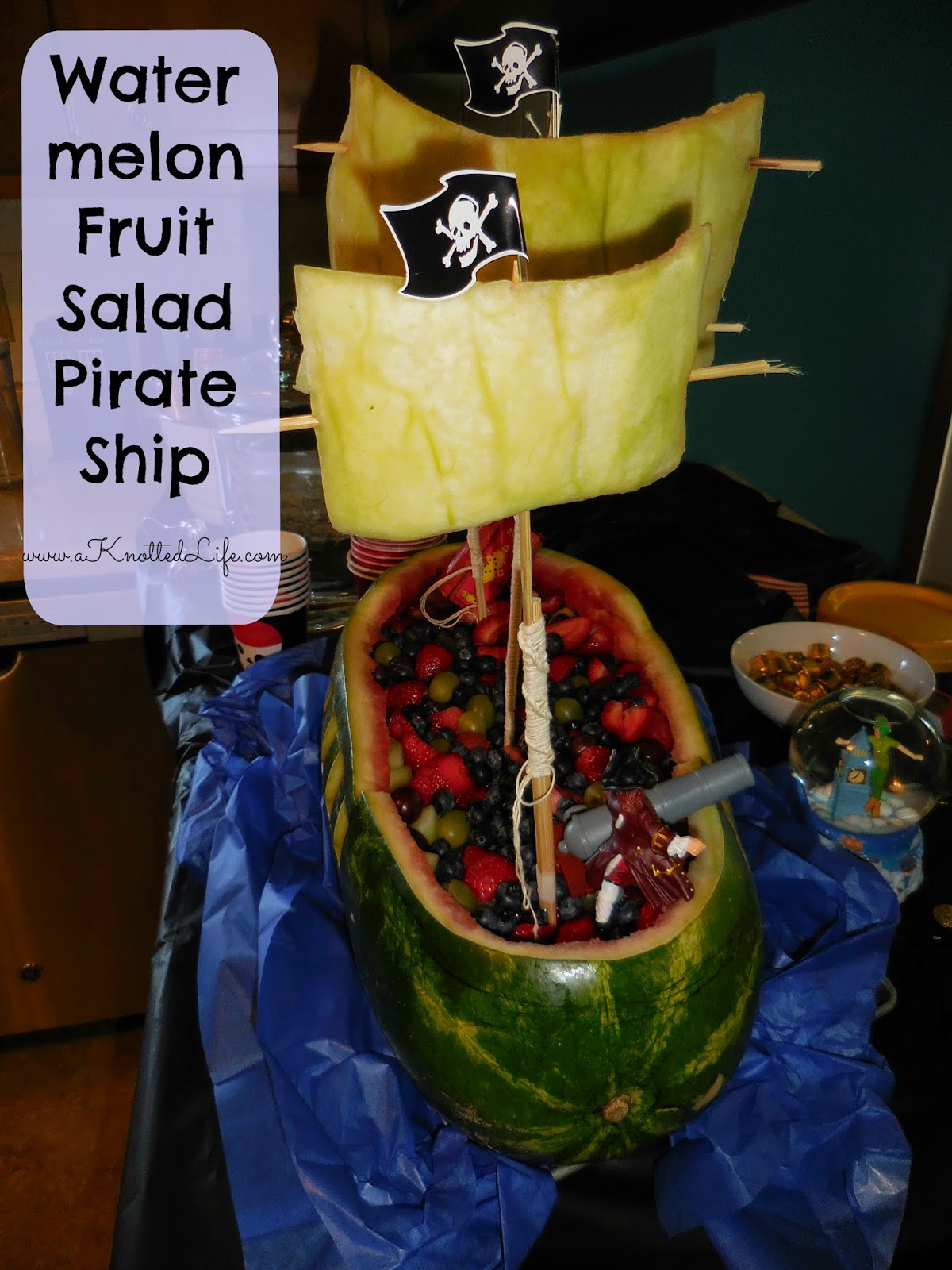 Ben always talks about "Captain Orangebeard" and so his Mormor found a captain with an orange beard. 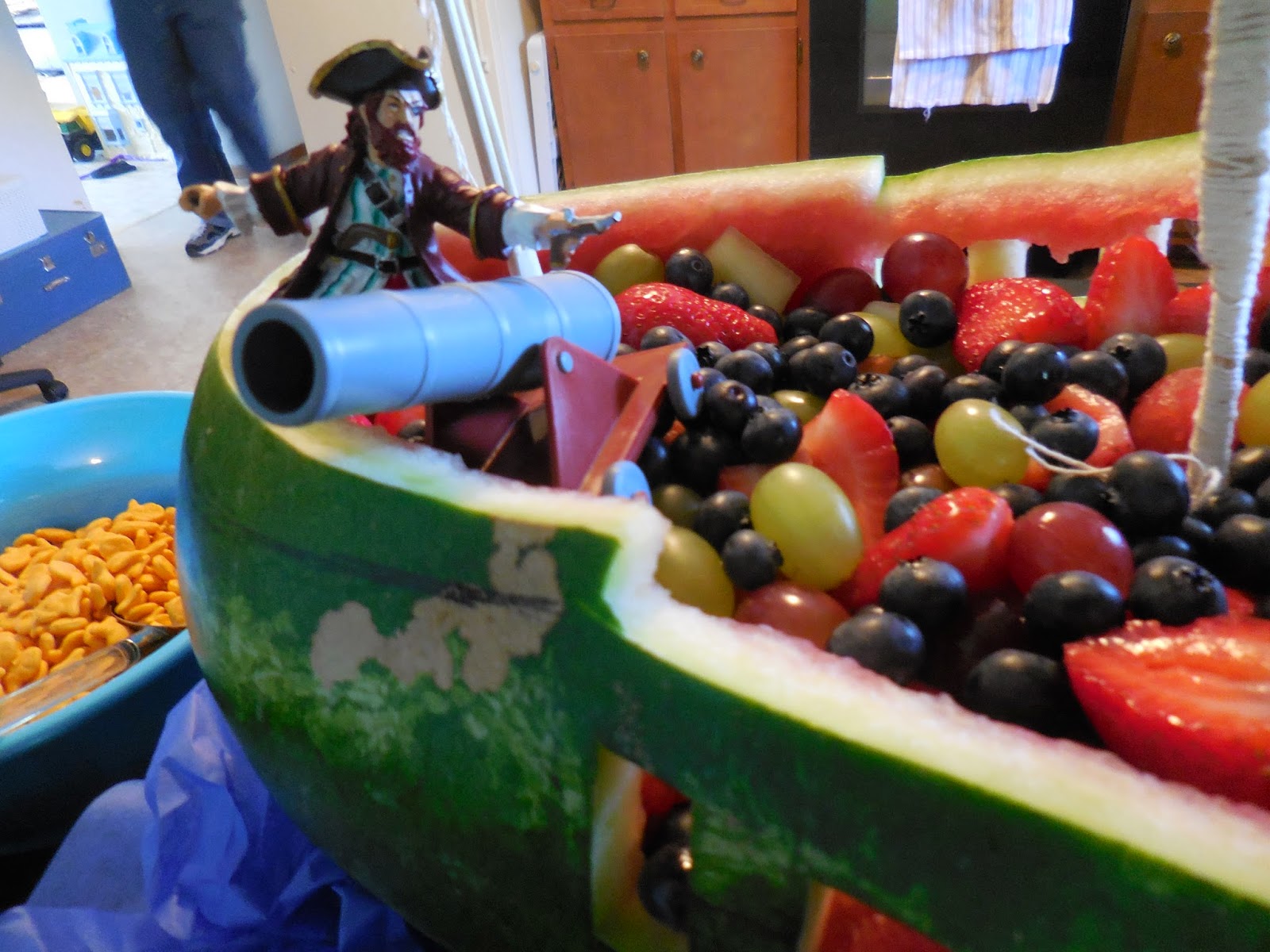 We had Captain Hook and Smee's Fish and Chips. Because of allergies I kept the two separate, though most people mix them. 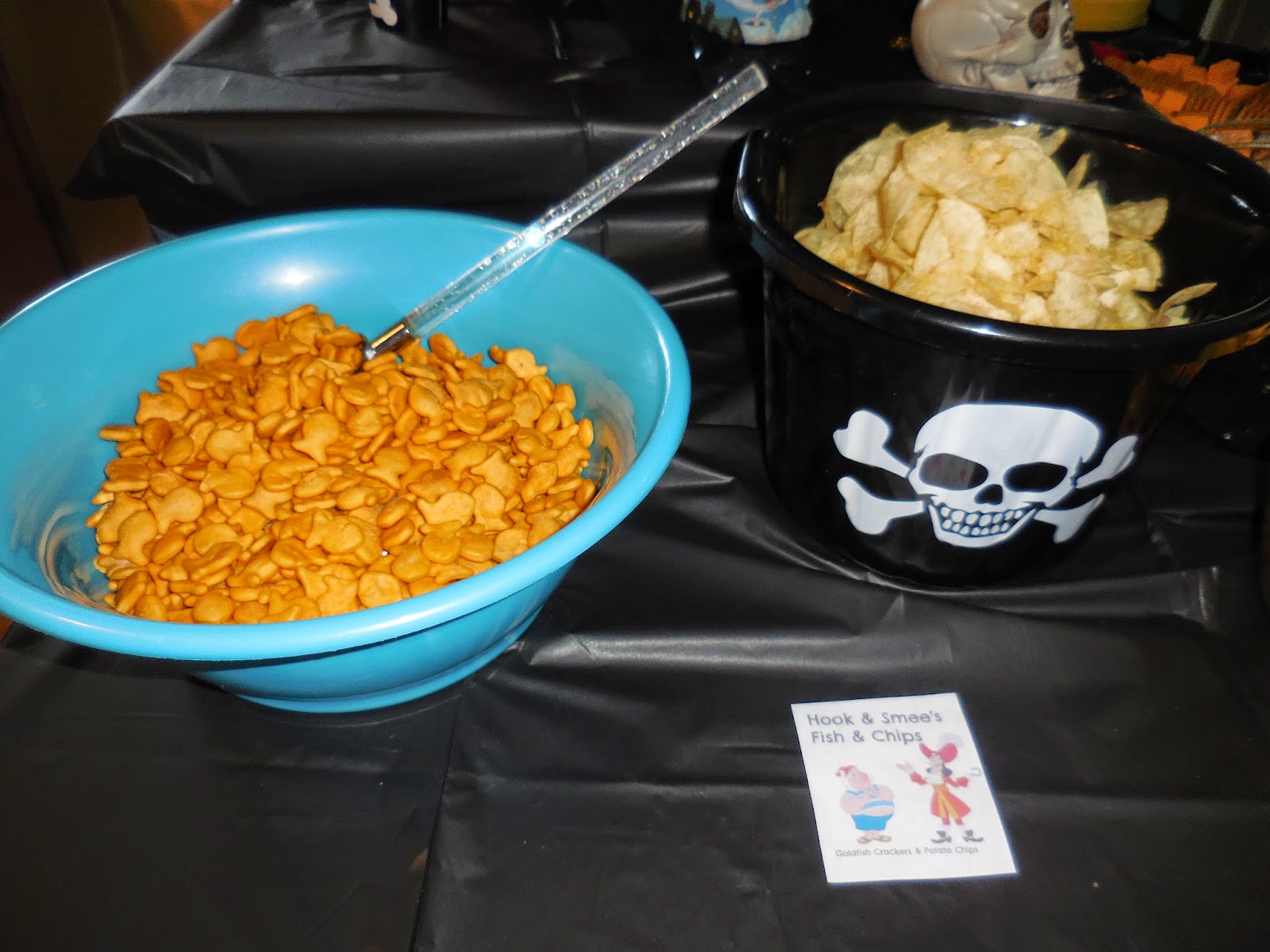 Two little tips: #1 I put an upside down bowl in the bottom of the big blue bowl so it looked more full. I knew I wanted to use the pretty blue bowl so it'd be remenisenct of the sea but it would take *a lot* of bags of Goldfish and I wasn't going to spend that much money. But the upside down bowl worked perfectly! #2 The chips are actually in a trick or treat bucket from when one of my boys was a pirate. 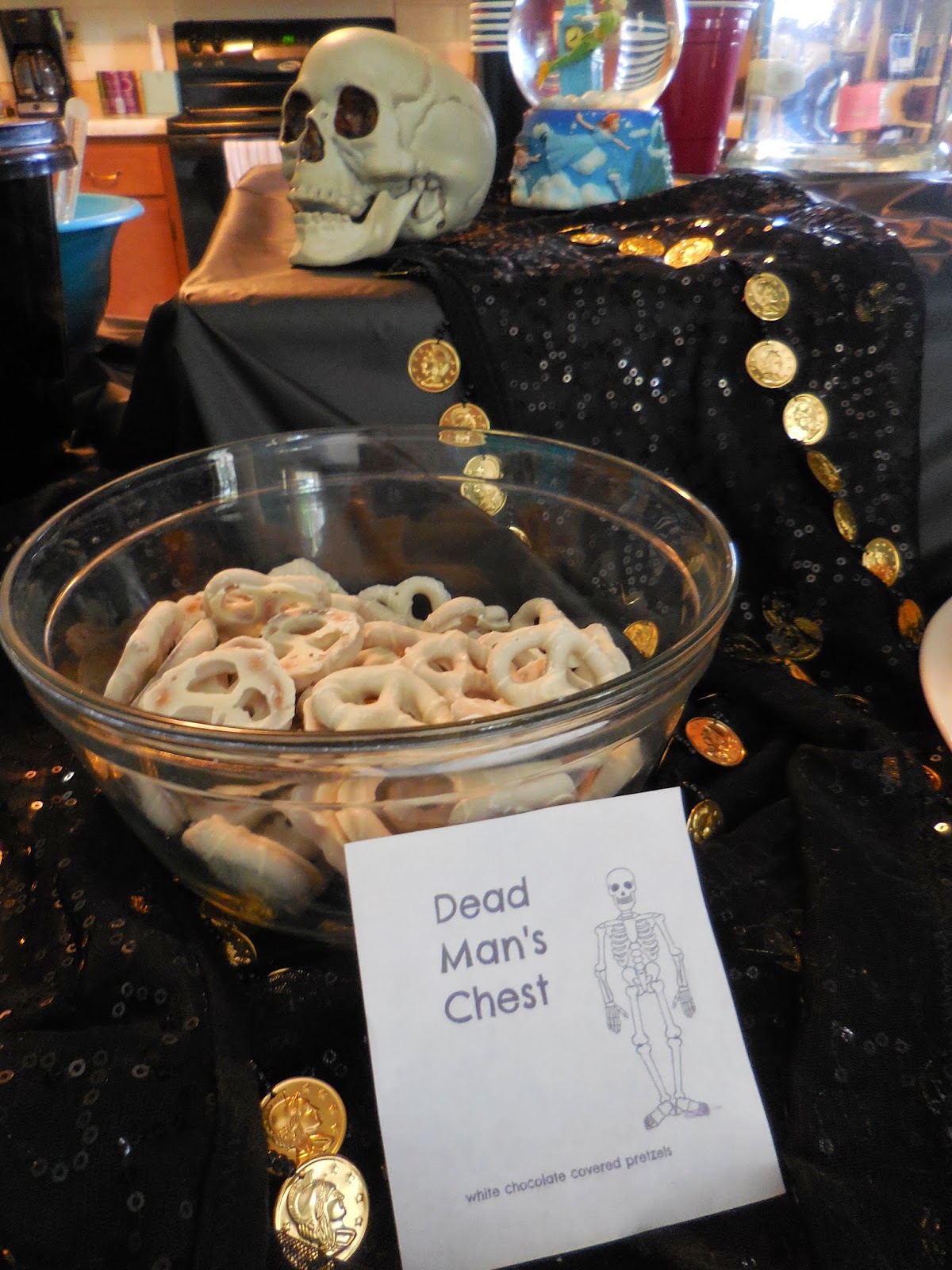 And then the night before the party I googled it and learned that the chest is referring to a treasure chest. Auntie Leila said to do it anyways and she's a BOSS at homemaking so I took her go ahead as more than good enough.

Cubby (from Jake and the Neverland Pirates) was the keeper of the gold doubloons... 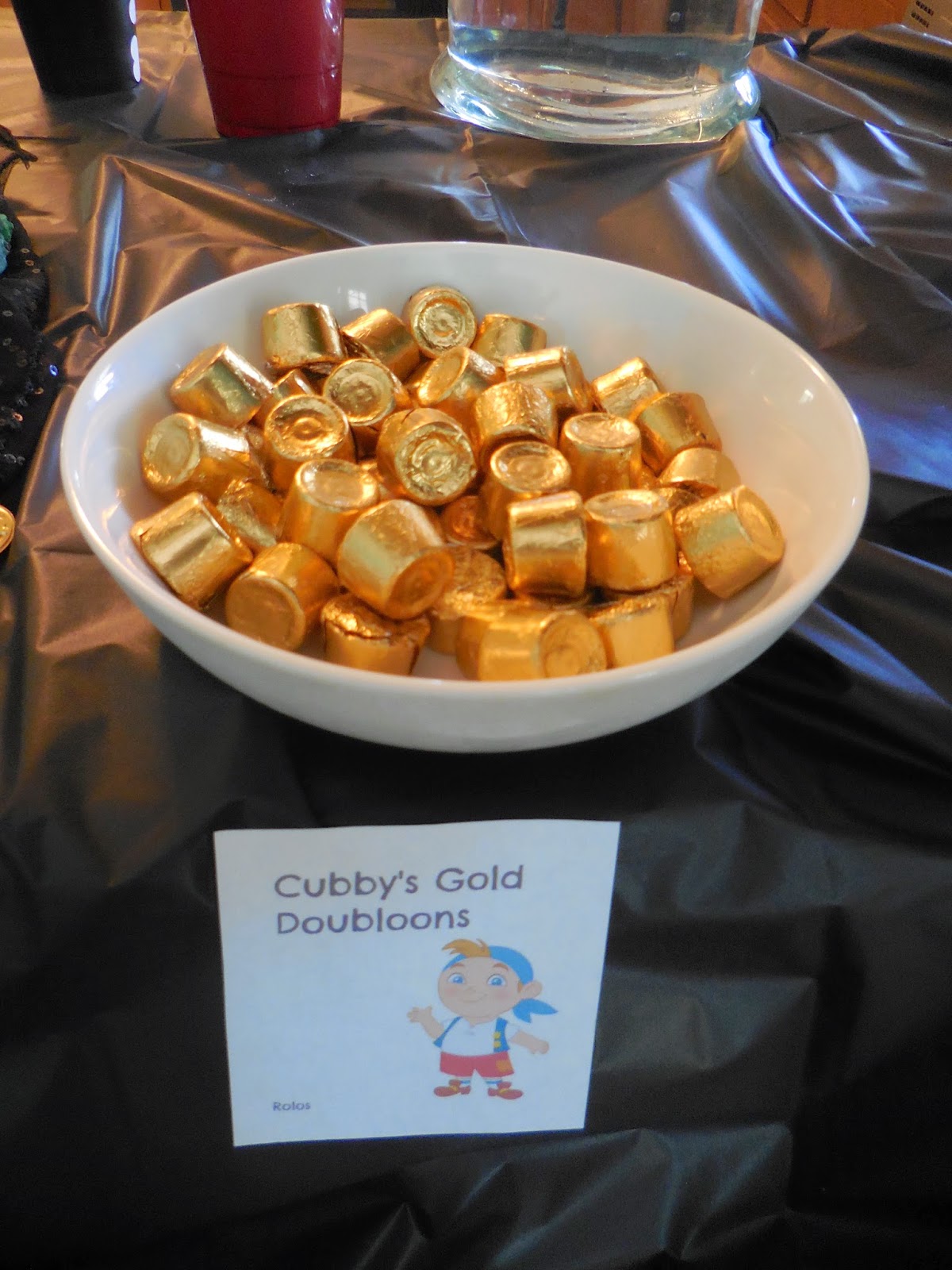 Some pirate parties had a plate of crackers labeled "Polly's Crackers" which I really loved. 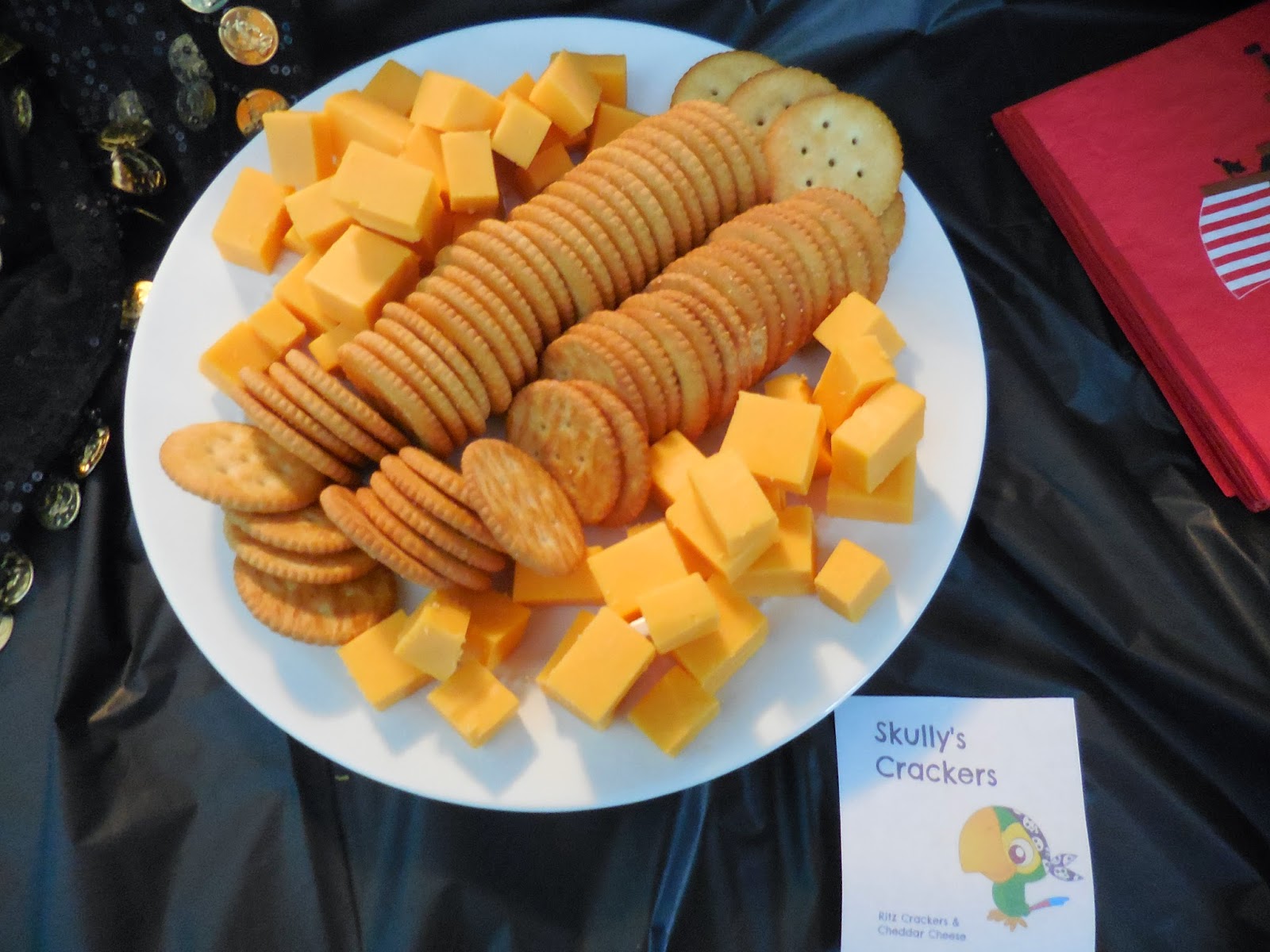 I called them Scully's, keeping with the Jake characters.

My mother- and sister-in-law also made the cake. Isn't it awesome? 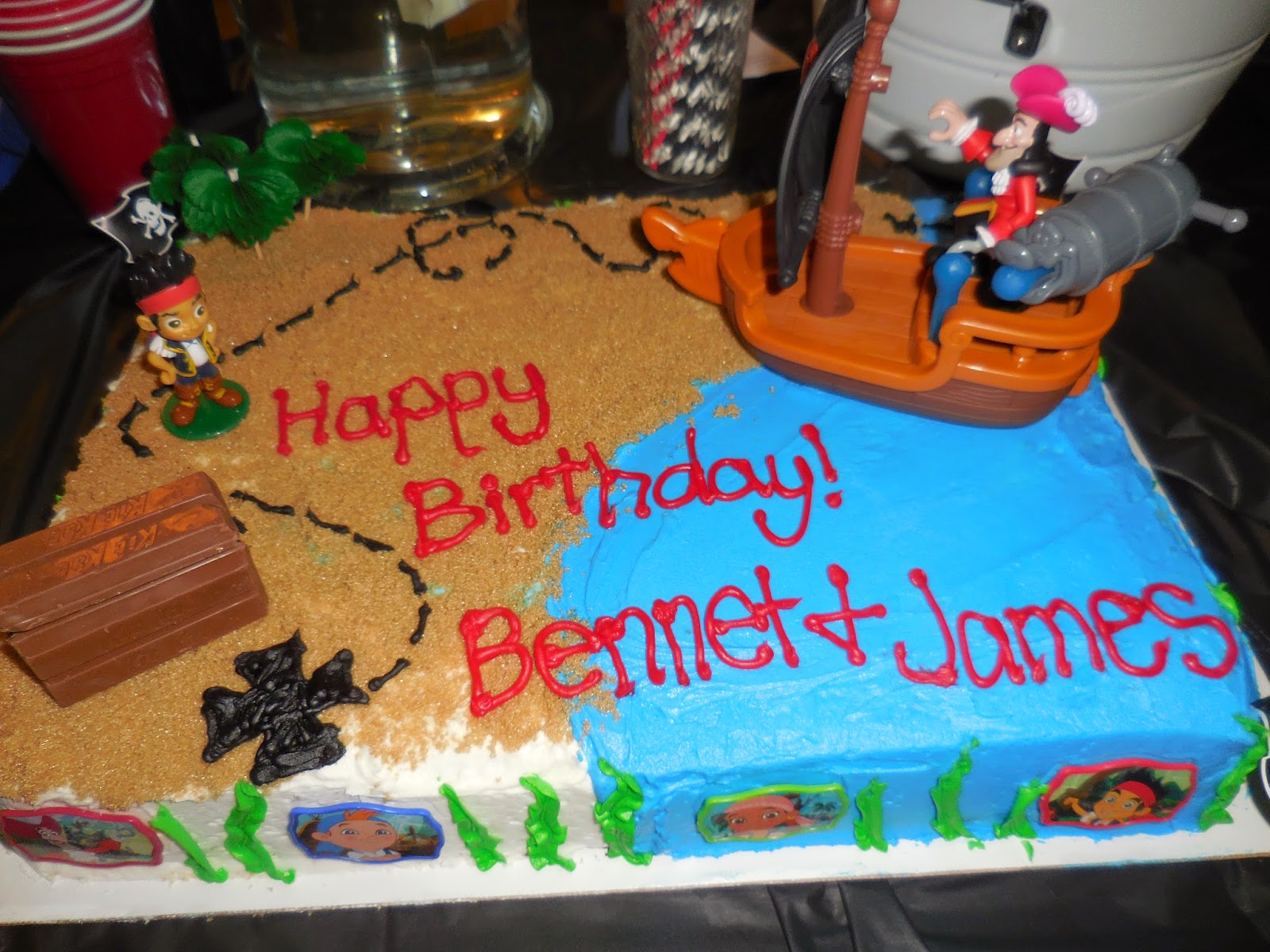 The Hook, Jolly Rodger, and Jake are all regular toys. The beach is made from brown sugar. The treasure chest was made of Kit Kat bars and was filled with yellow Skittles. 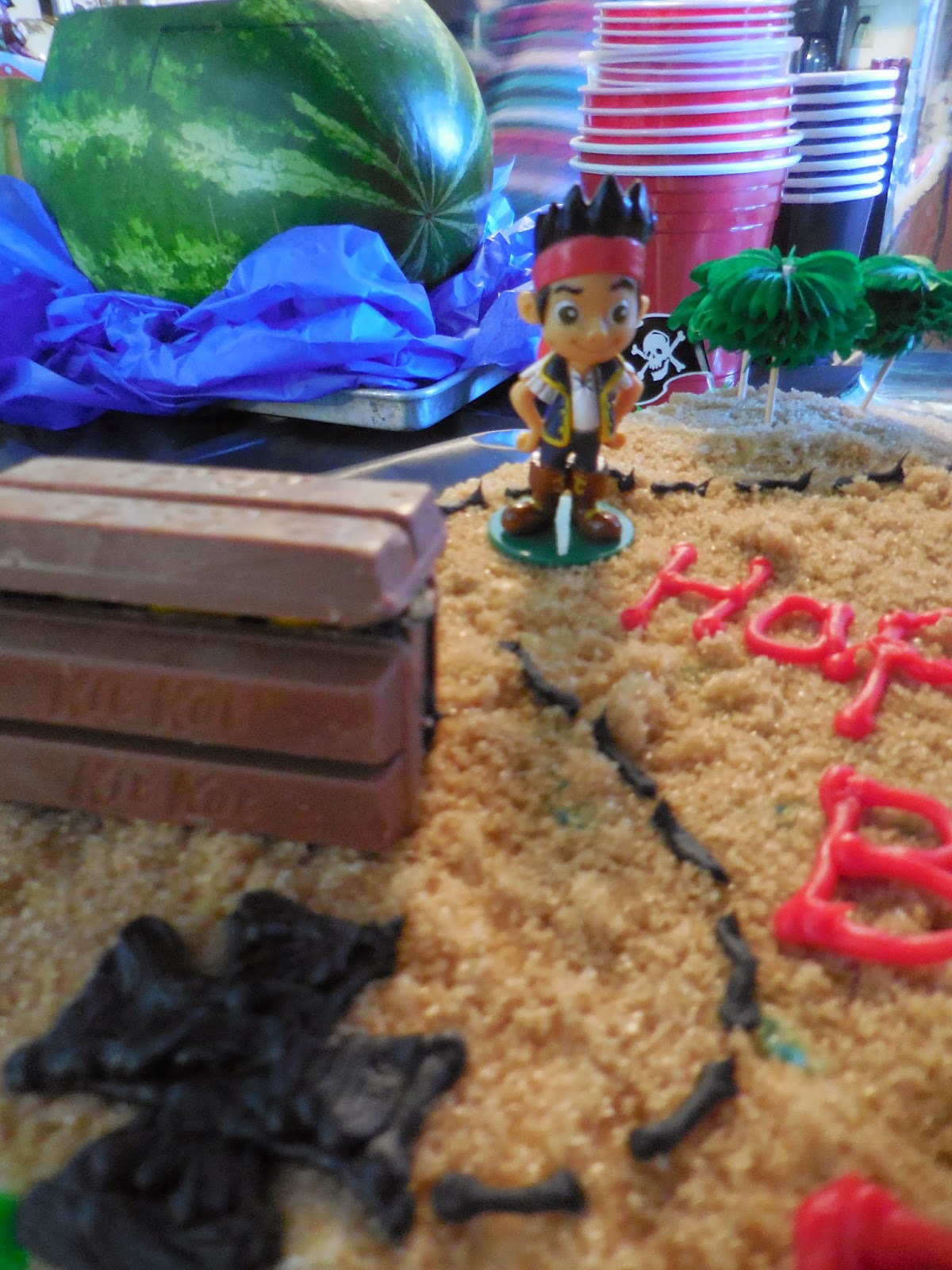 Because of JF's allergies he wasn't able to eat the cake but I had special Rice Krispie Treats ready for him. They were supposed to be shaped like treasure chests but someone dropped the ball on that one. If you know kids with wheat, soy, egg, dairy, and nut allergies a great alternative for a sweet treat for them are Rice Krispie Treats made with coconut oil instead of butter. Make sure you read labels but I've found Kroger's Crisp Rice cereal and marshmallows to be safe. You won't miss the butter - I promise!


The Drinks
I wanted to keep things pretty simple with the drinks. I had Sea Water, also known as ice water and some Izze carbonated juice. 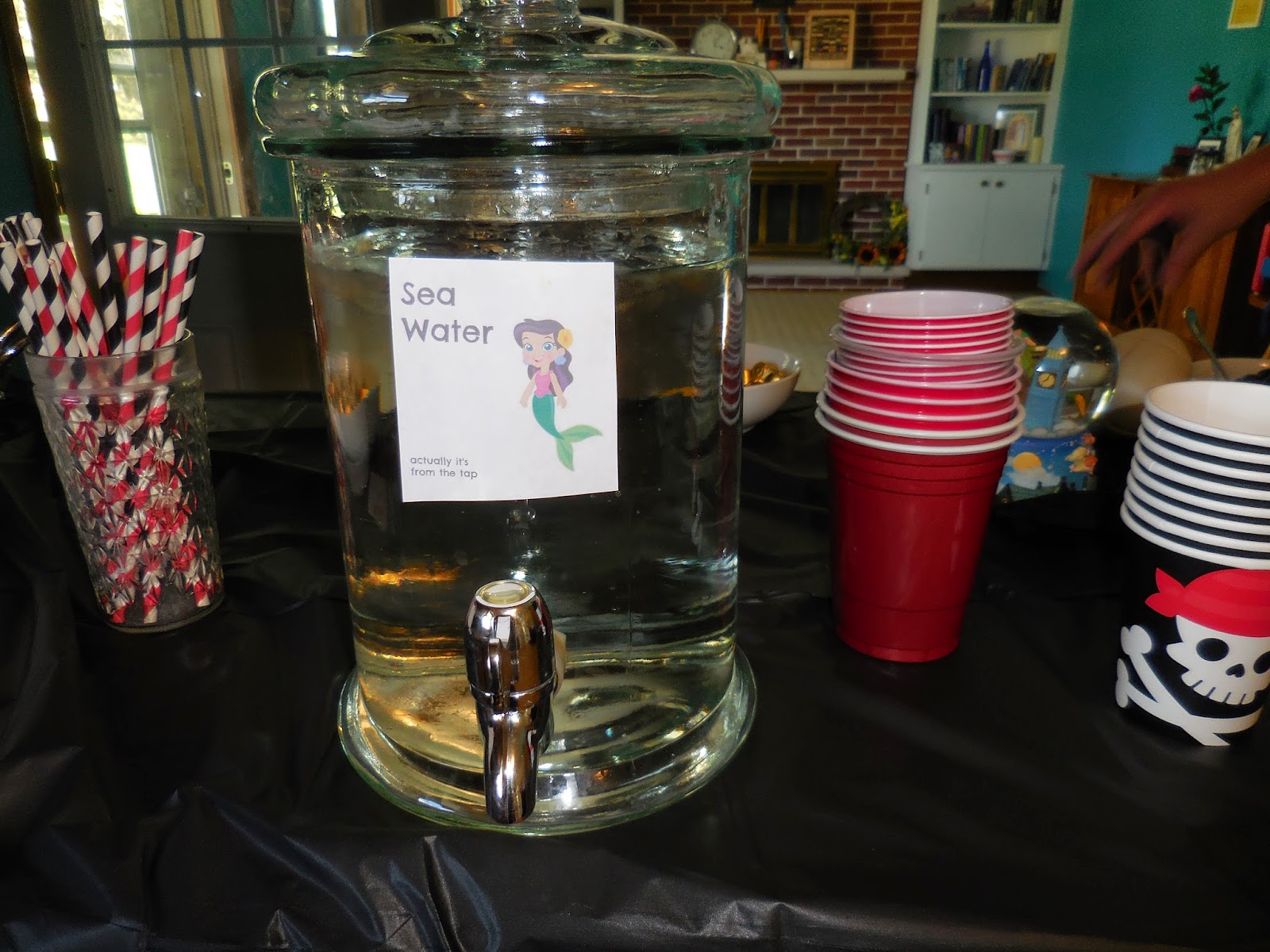 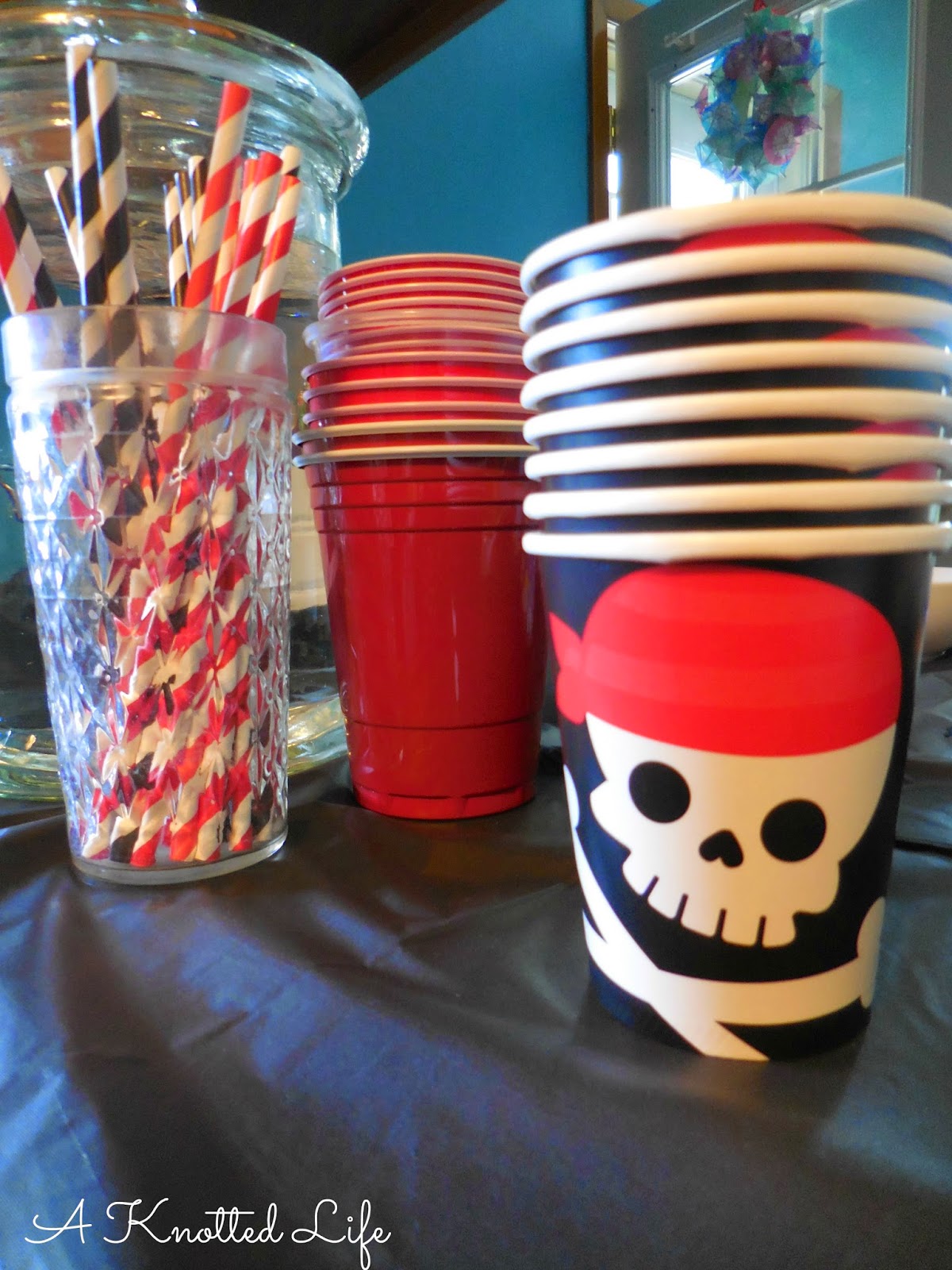 The Izze juices I renamed Izzy's Carbonated Juice and my boys were delighted. It was a really simple way to tie in a Jake and the Neverland Pirates character. 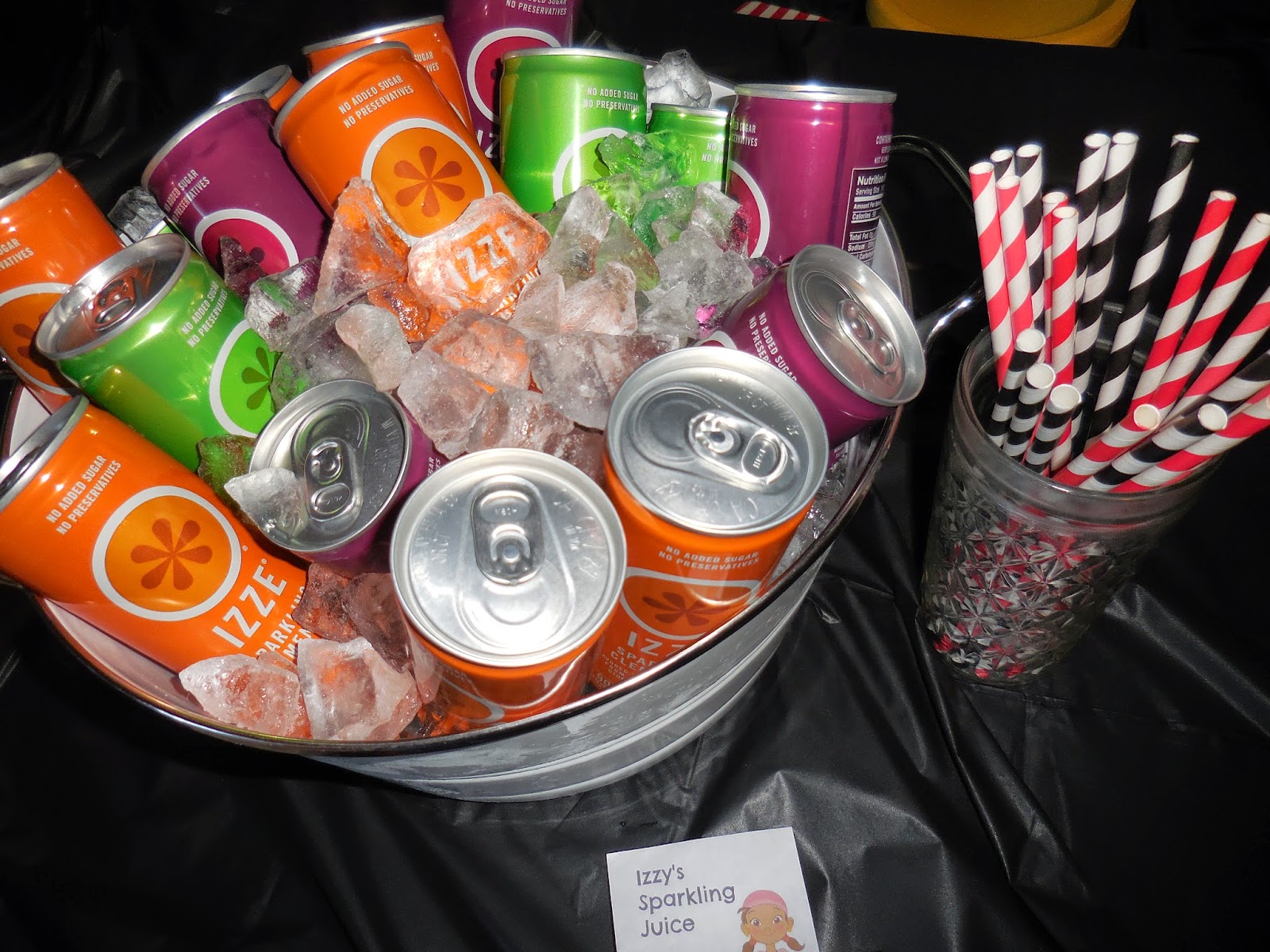 These are the little signs I made to label the food. 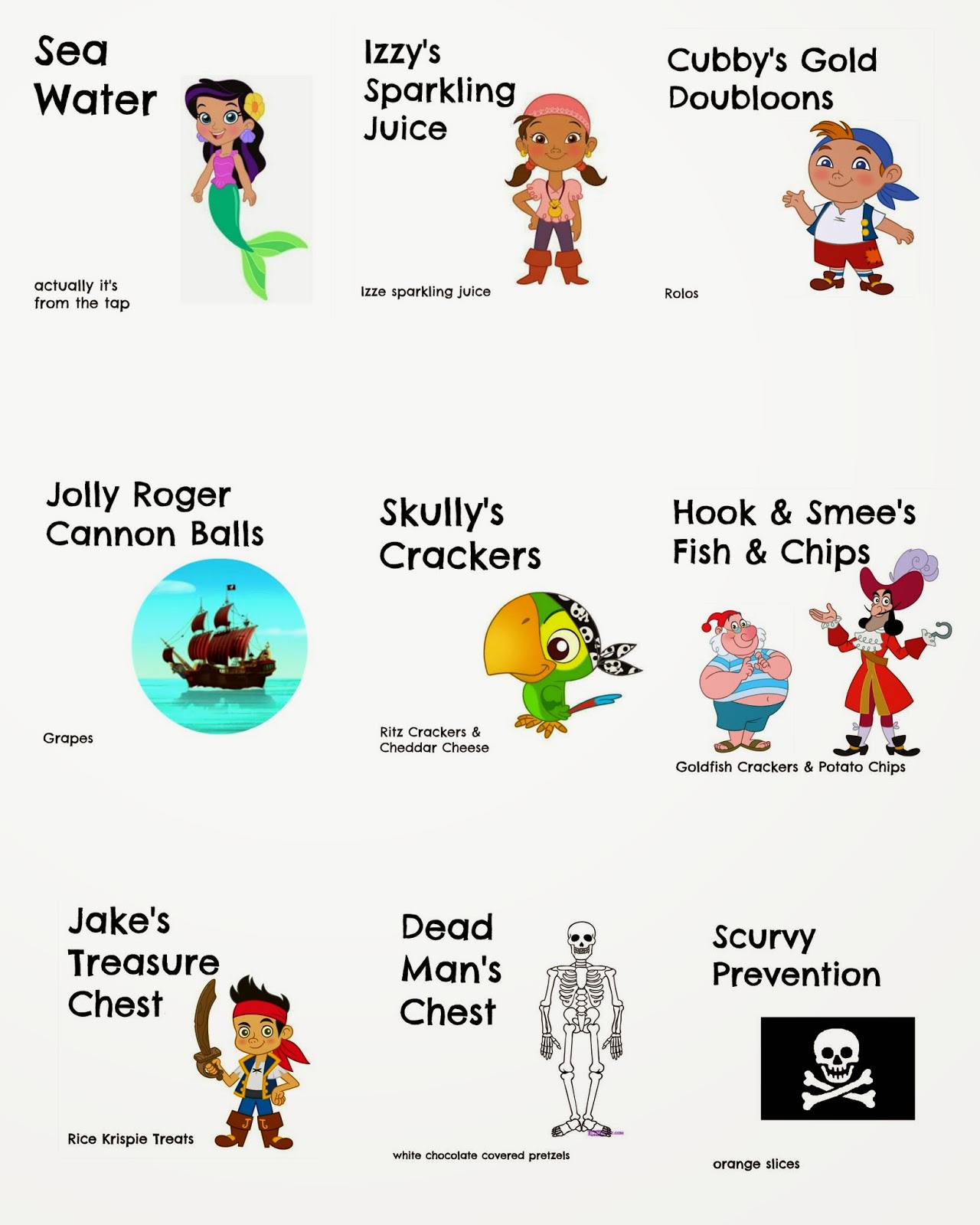 Little Touches to keep the theme

Ben dressed in his pirate costume for the whole party. I also had eye patches, purchased in the party section at Wal Mart, on the tables. People - okay me and the kids - wore them throughout the party. 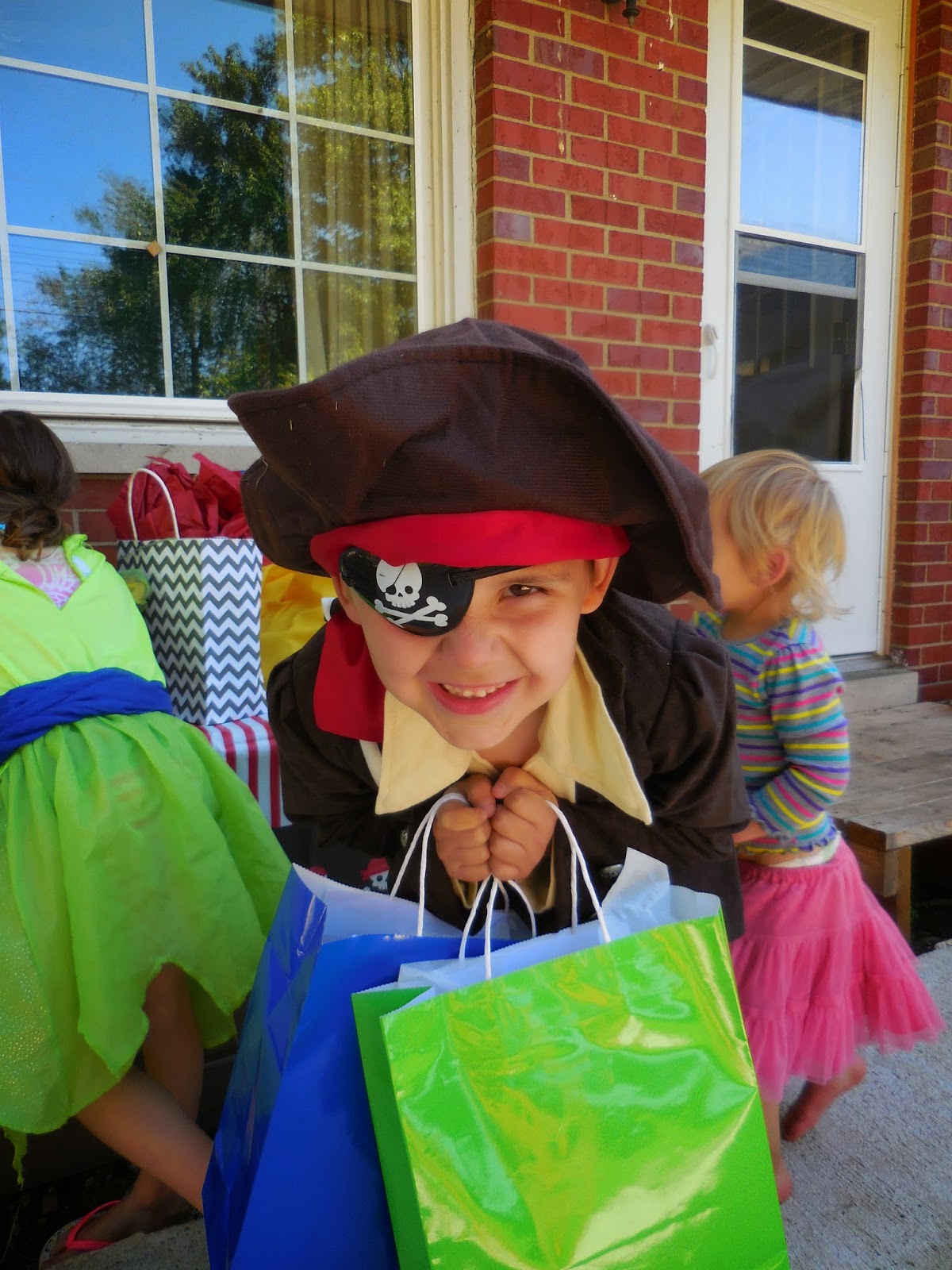 Some of the gifts even got in the spirit! 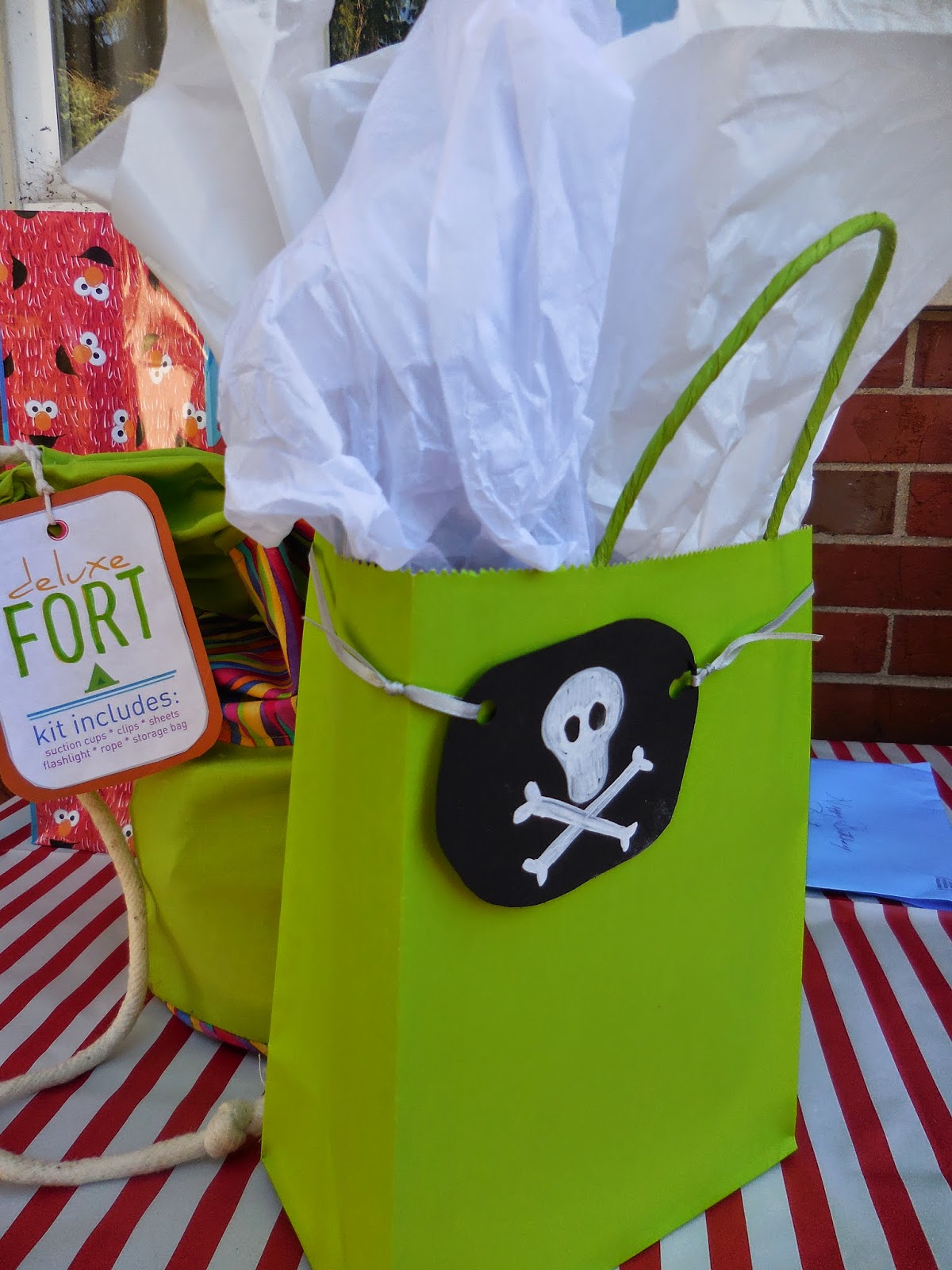 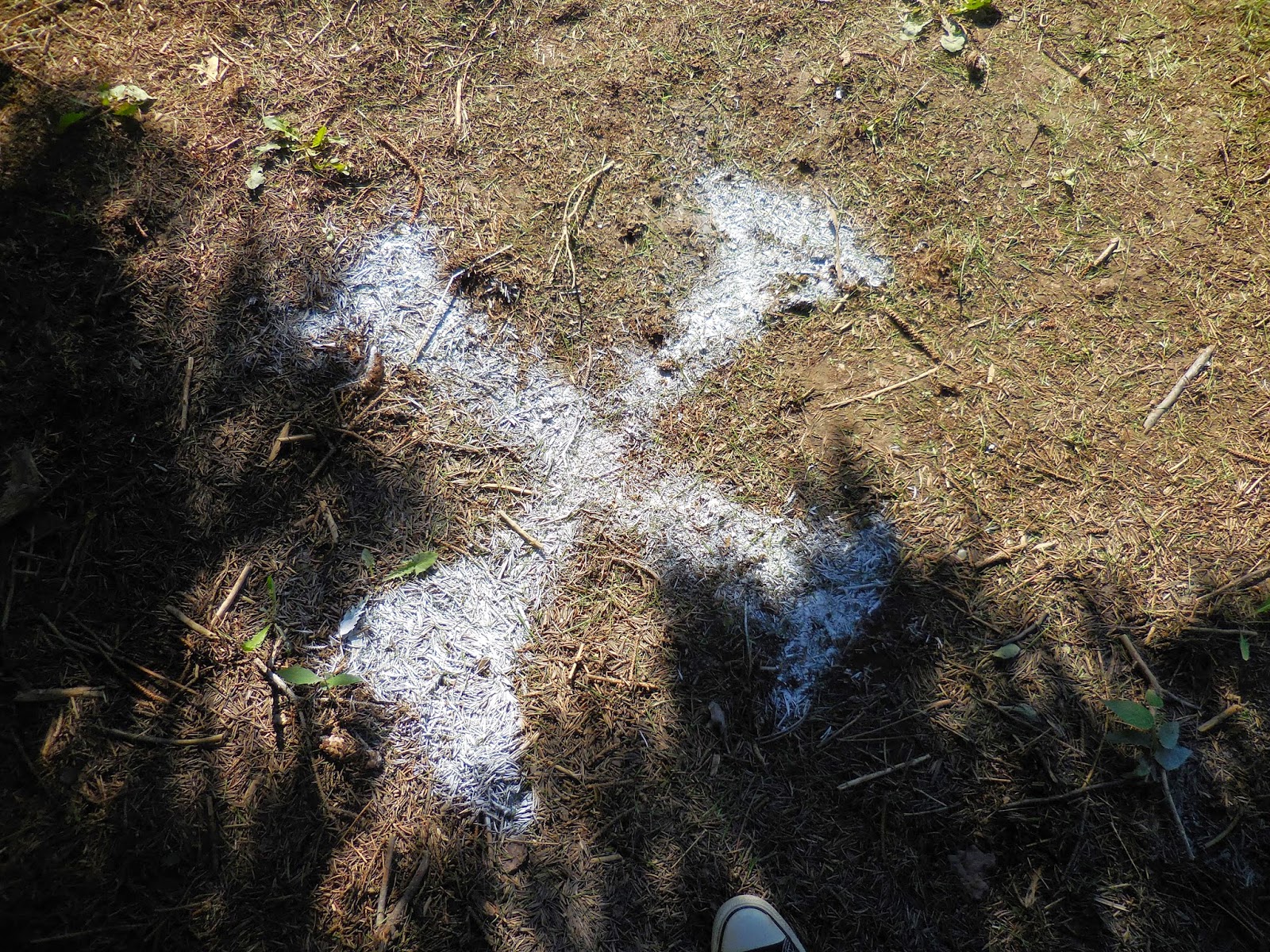 a pirate ship shirt for the baby brother. 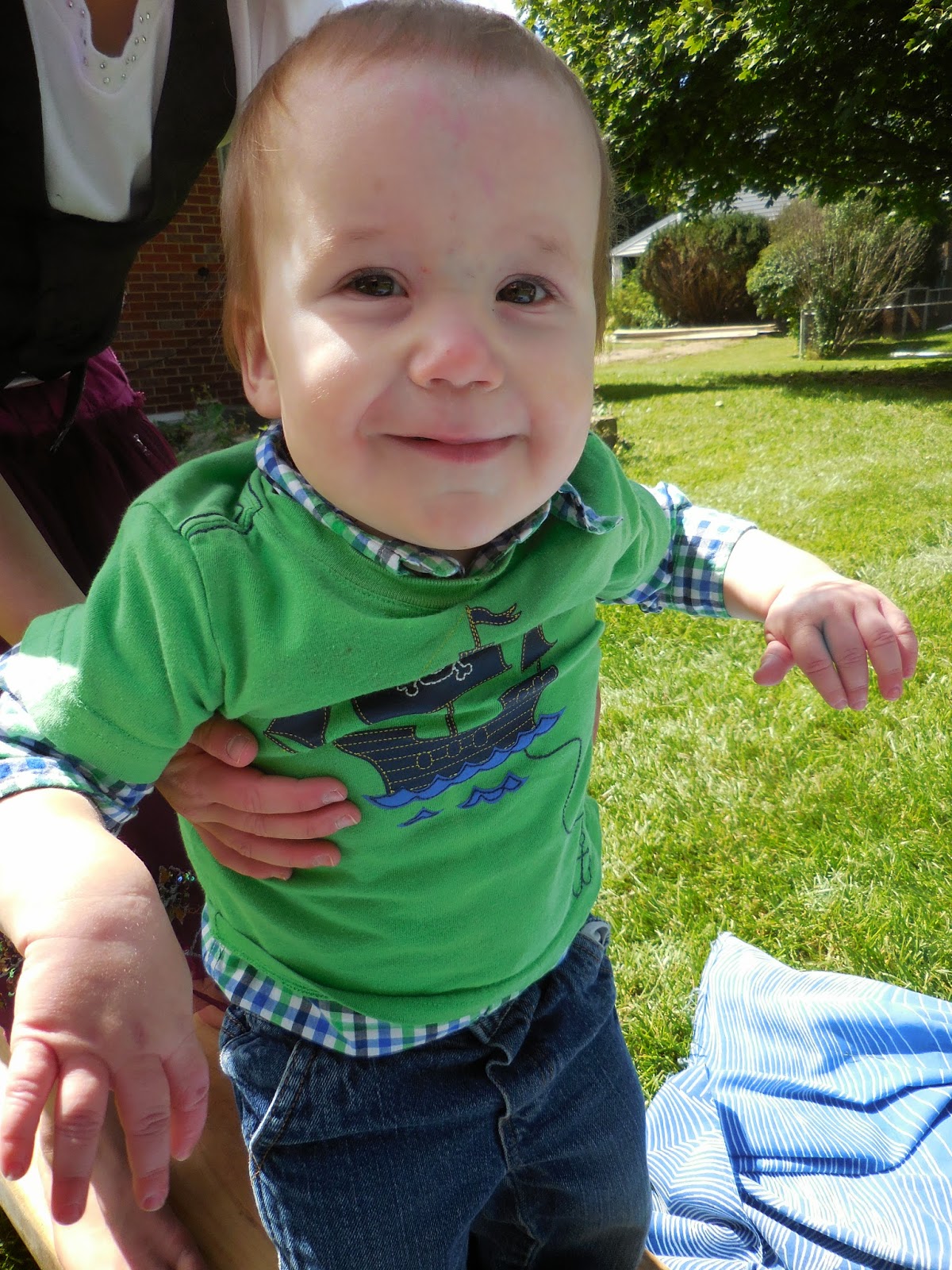 Our fishy bubble blower was a nice touch and the kids loved it! 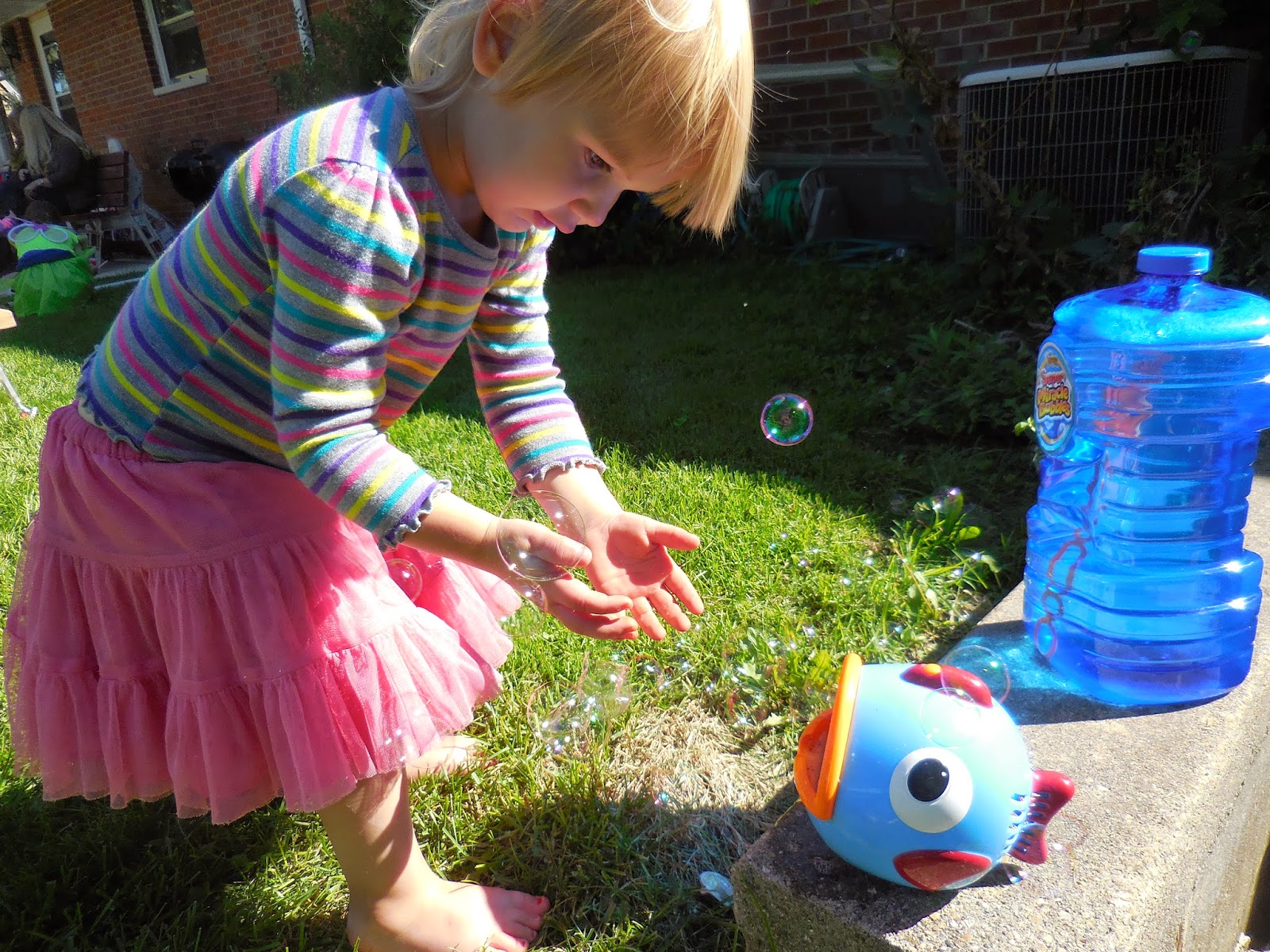 I didn't want to do games but I did want to have some activities the kids could do whenever they wanted. The first and easiest was gathering all our fairy and pirate dress up clothes, throwing in the dinosaur costume, and calling it the Neverland Dress Up Bin. All the kids loved it! 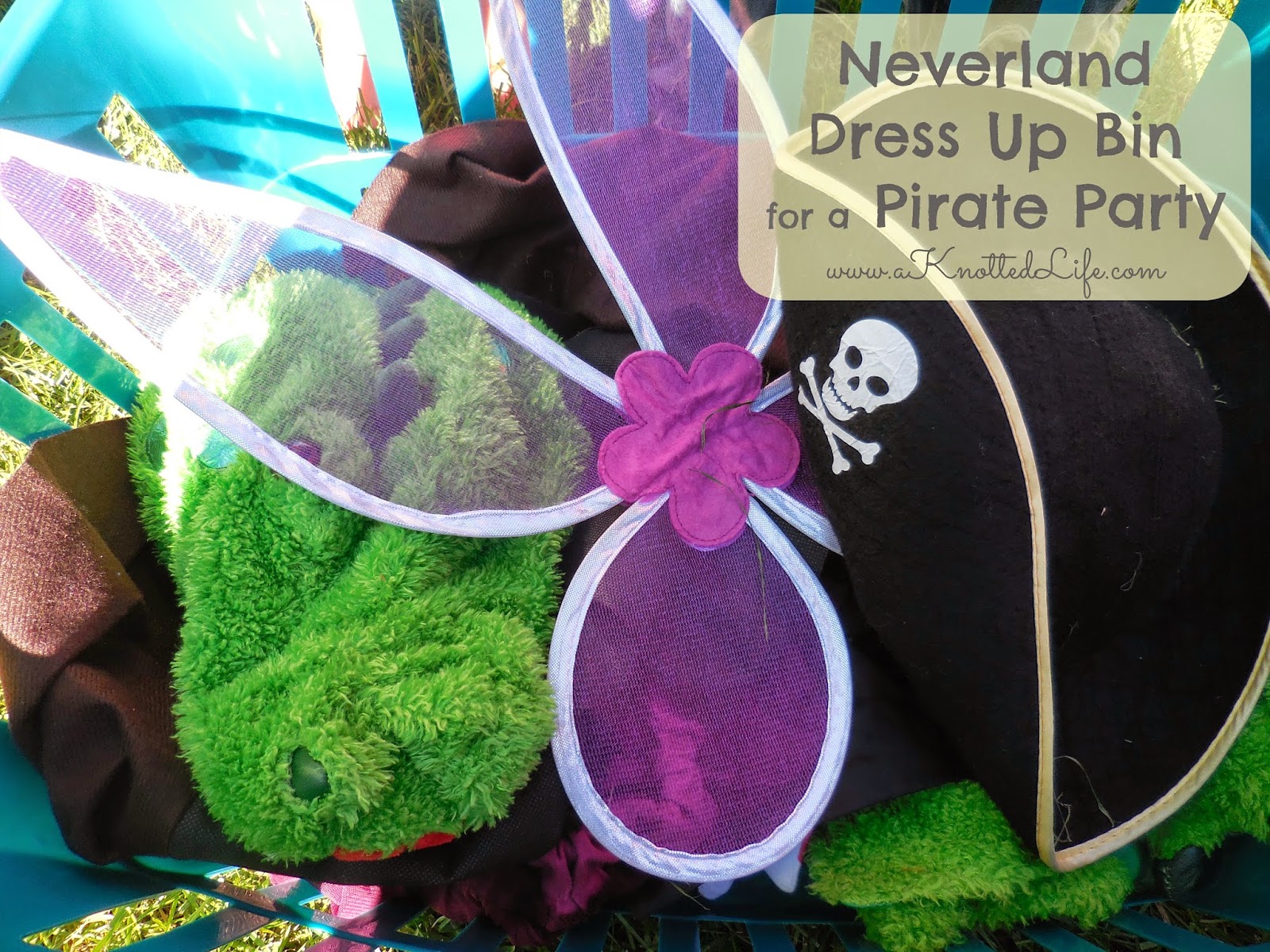 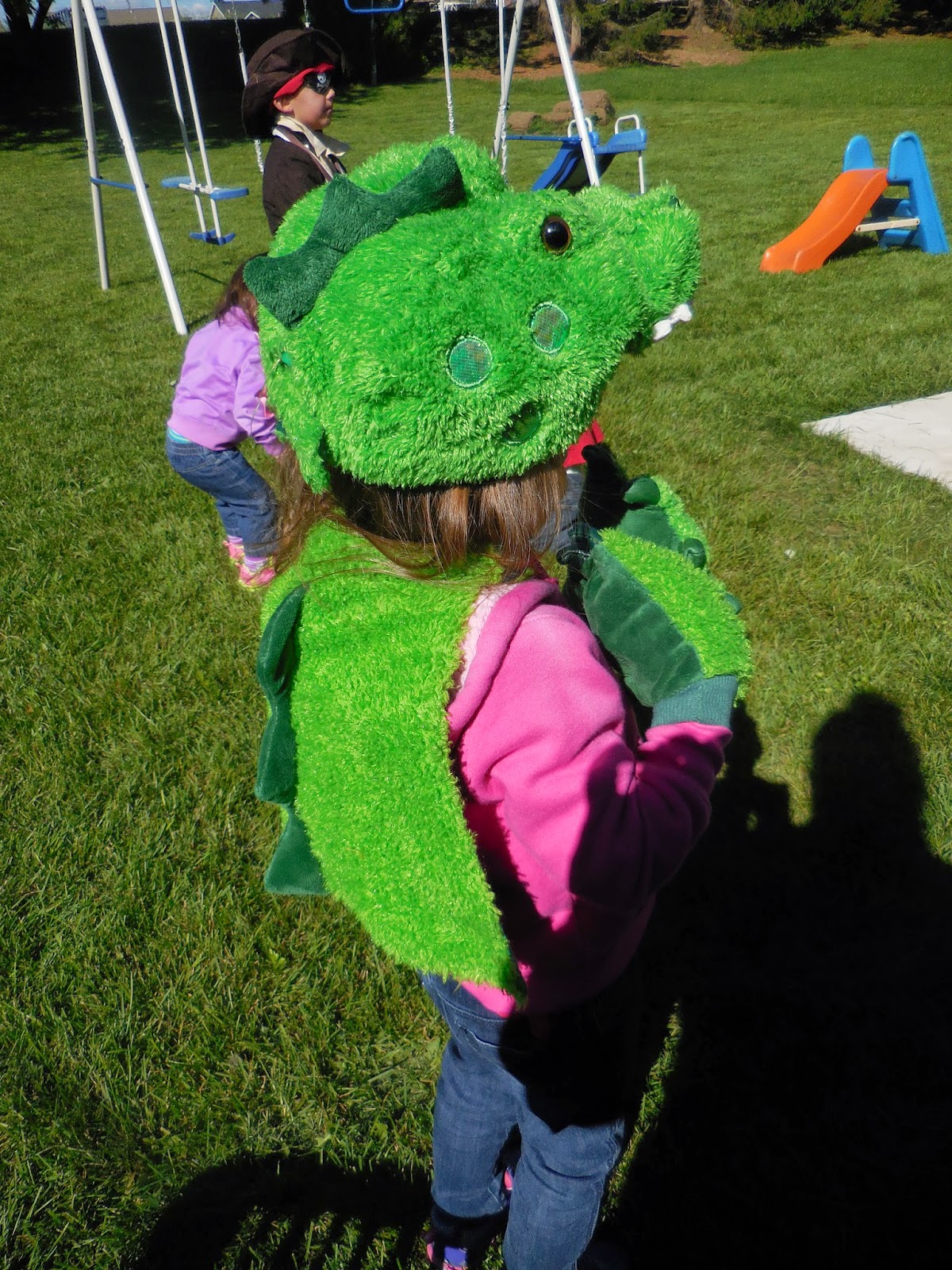 I also buried some treasure in a small sandbox. The kid could dig for bubbles, fake jewels from the craft section, and a few little odds and ends. 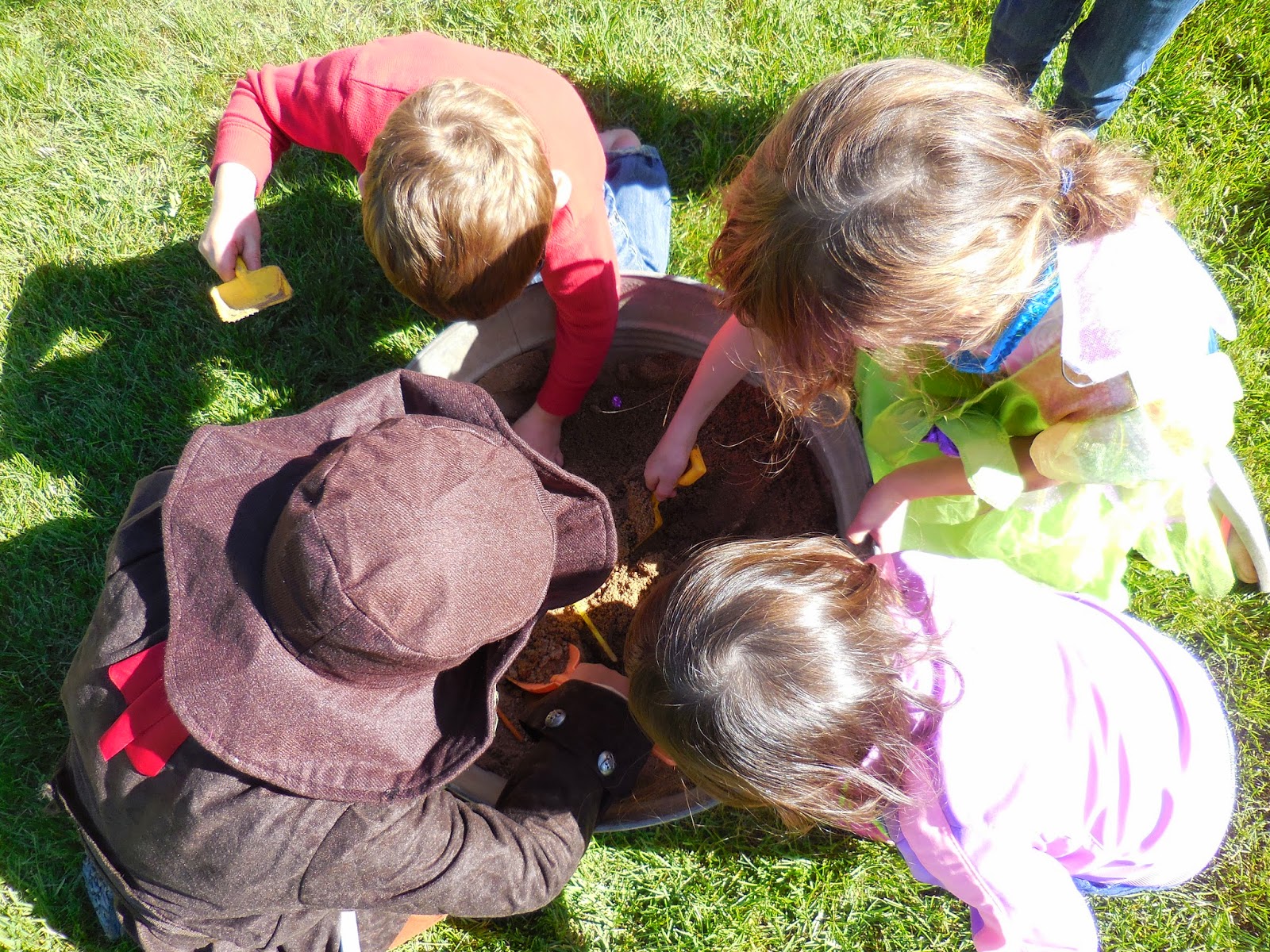 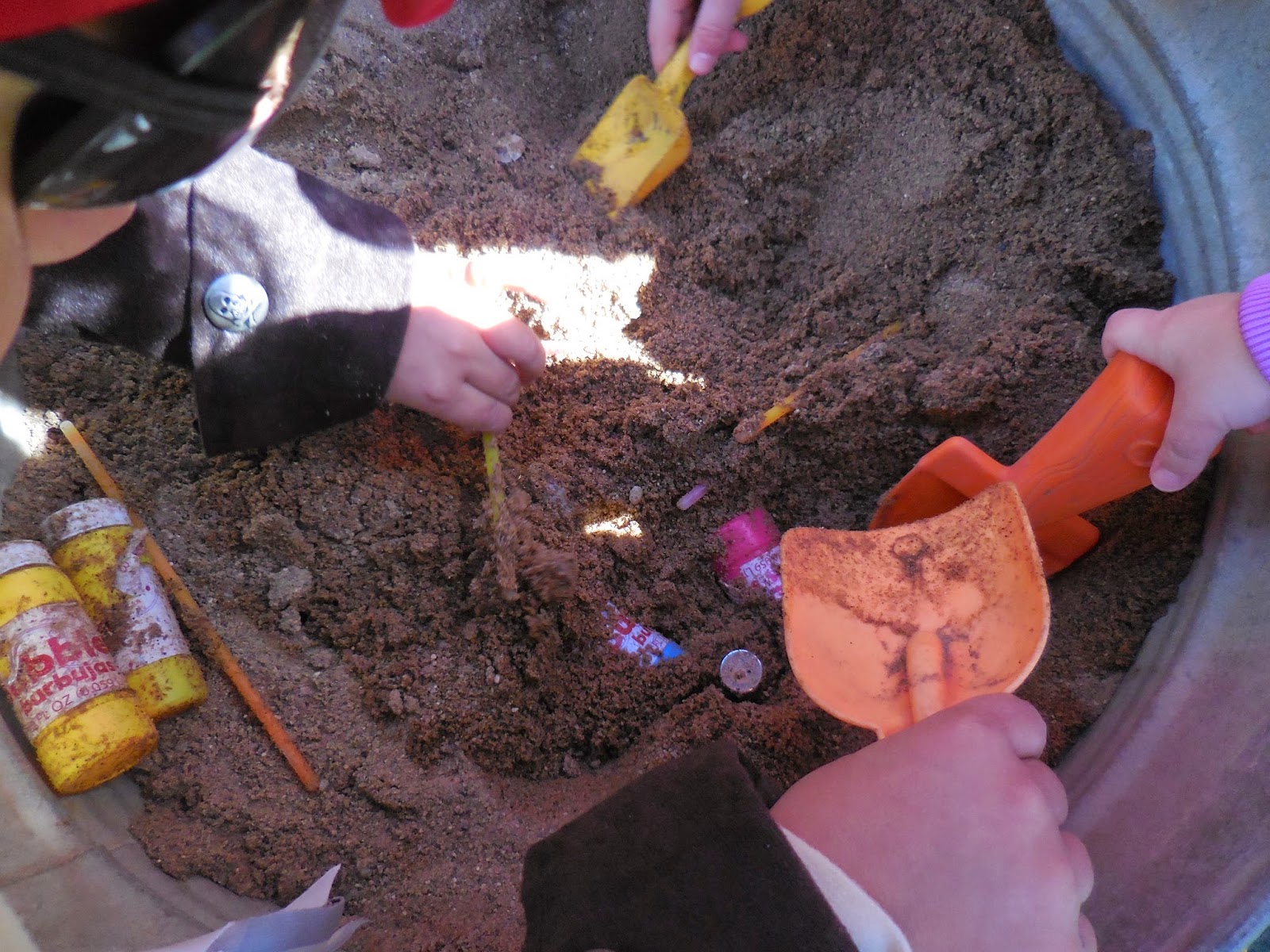 Finally, we had a plank. Travis actually made a diving board type plank with some lumber we had in the garage and basement. The kids walked the plank over and over and over again. 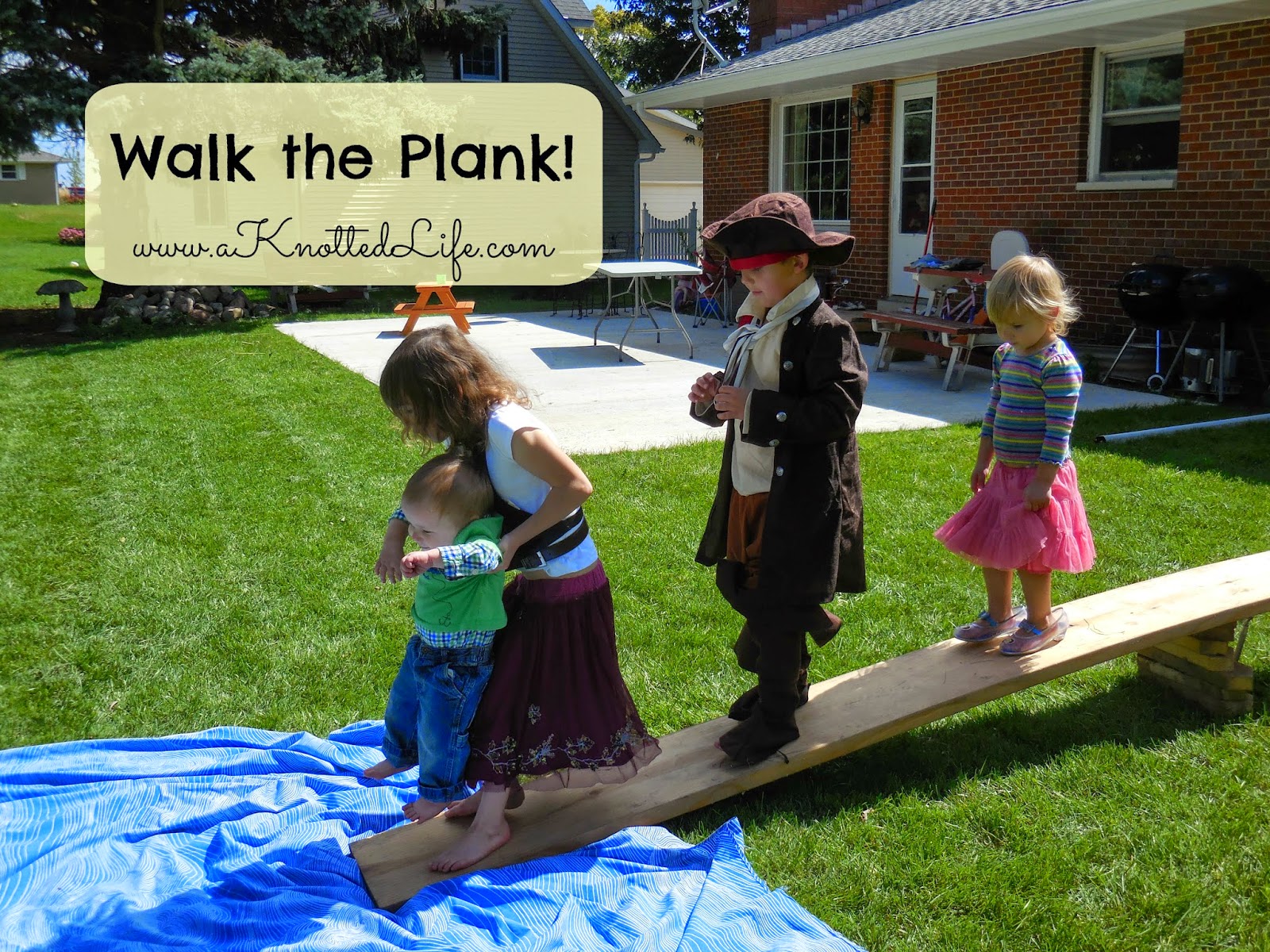 Because it was a cool day we didn't want to use a baby pool with water underneath. Instead I borrowed a sheet from my mom. It's blue and has these neat white swirls on it, and they always reminded me of the ocean. 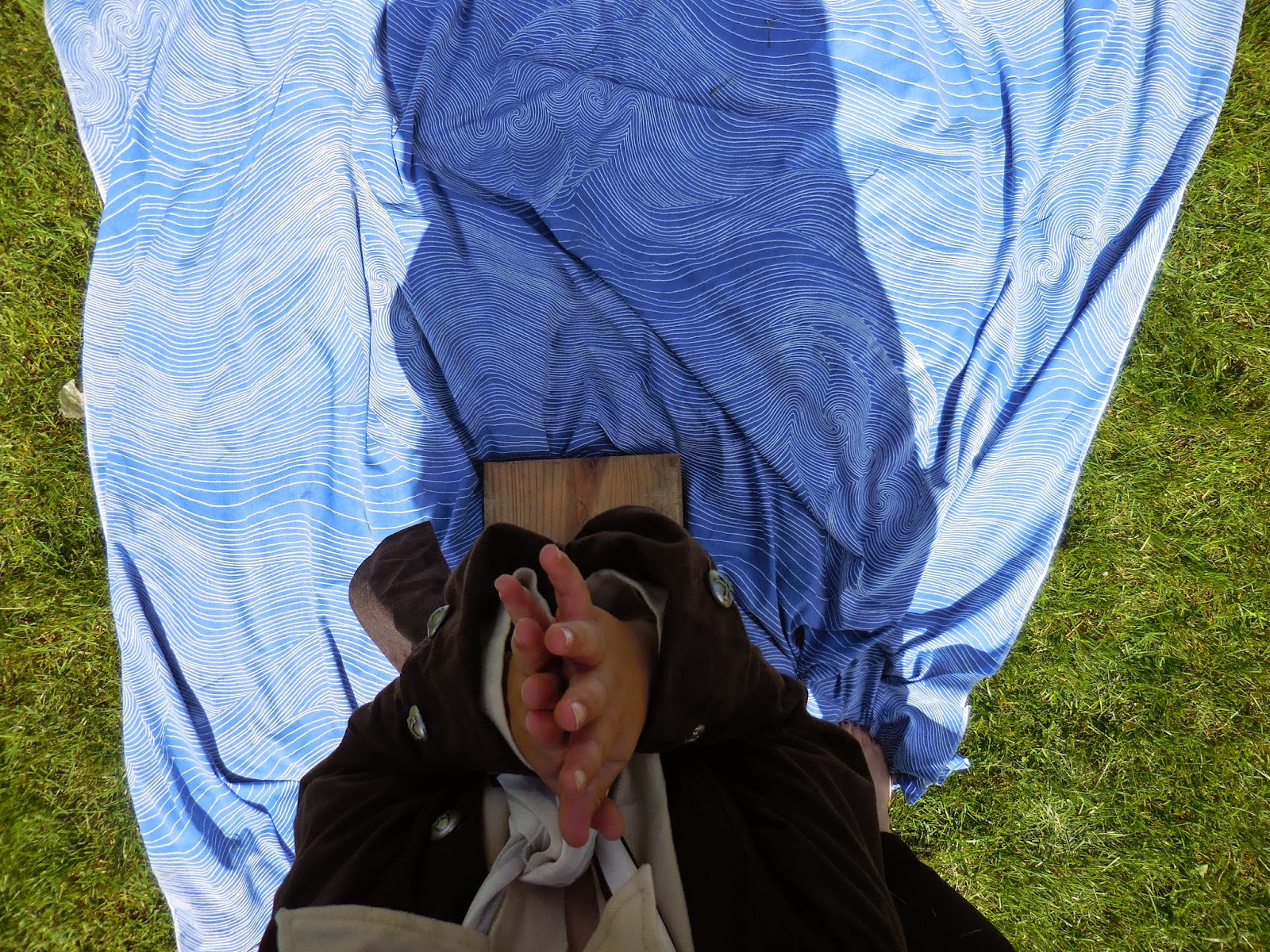 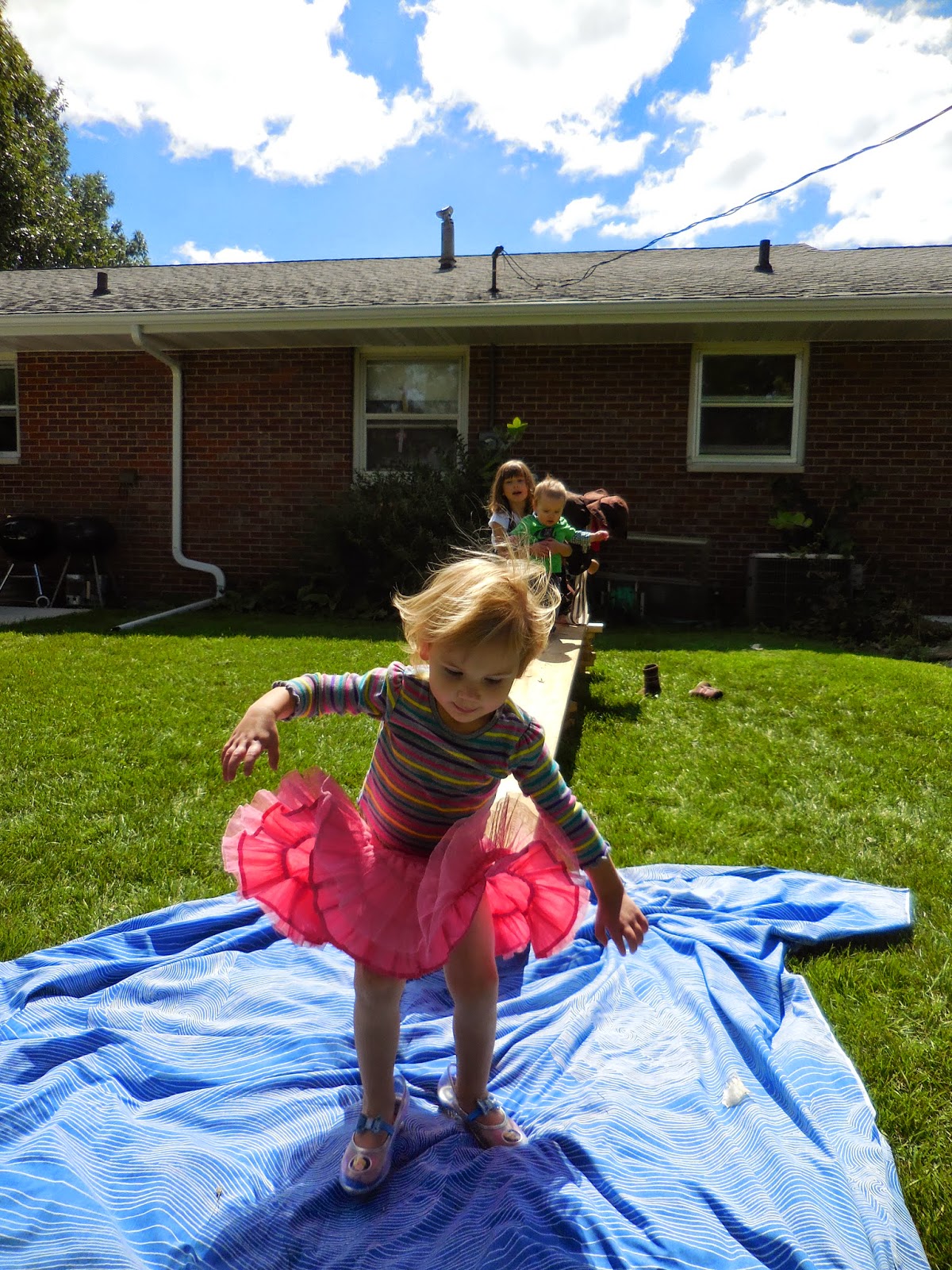 The whole afternoon was a lot of fun. Ben and JF loved every little bit of it and it was relatively easy to do! Of course, Pinterest helped me out a great deal with lots of fun ideas. You can see my pirate birthday pARRRRRty board here.